Actor Ali Ansari showcased ultimate relationship goals in his recent dainty exchange of sweet comments on the photo of Saboor Aly from her latest appearance in the drama serial Parizaad.

Ever the supportive fiance, Ali Ansari is just loving Parizaad and Dilawar’s bond, which is performed by his ladylove Saboor. 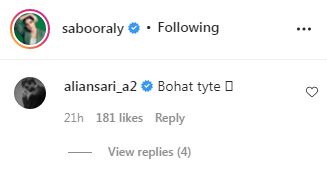 Pakistani actress Yashma Gill is all smiling as she celebrates her birthday...

The most adorable couple of showbiz industry Falak Shabbir and Sarah Khan,...

Virat Kholi: ‘India vs Pakistan is just another game for us’