On Sunday, the Meherposh star took to Instagram Stories to share an old interview with the iconic singer, in which Noor Jehan was seen discussing the significance of honouring seniors in the field.

Ayeza’s comments come after singer Ali Azmat voiced distasteful comments on the deceased singer. saying, “You put on a show, you would see Noor Jehan draped in a saree, with heavy jewellery and over-the-top makeup. We would get irritated by mai (elderly woman). We would think why would they make us watch this kofta (meatball).” 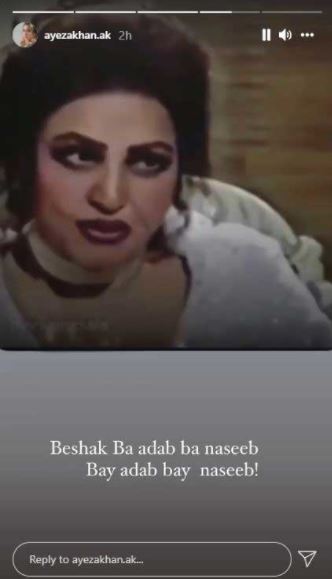 Noor Jehan, also known by her honorific title Malika-e-Tarannum, was a Pakistani playback singer and actress who worked first in British India and then in the cinema of Pakistan. Her career spanned more than six decades.

Bella Hadid talks about depressive moods in a latest interview

American model Bella Hadid, who uploaded a series of depressive pictures in...

The royal family is once again divided, this time, not any Duke...

Kim Kardashian wished birthday to the British supermodel, she took it to...

Zayn Malik is said to have cheated on Gigi Hadid with TOWIE...

Alizeh Shah is a young Pakistani actress with a lot of potential....

The royal family has generally remained silent about the turmoil involving Prince...

Alizeh Shah is a famous Pakistani actress. Her performance as Palwasha in...

Kate Middleton may be over heels in love with Prince William, but...