Mawra Hocane shares a snap of personal chat with her mother

Mawra Hocane shares a snap of personal chat with her mother

Mawra Hocane is a gorgeous Pakistani actress and model. She was born on 28th September 1992. In 2011, she made her acting debut in the drama series Khichari Salsa.

On Instagram stories, actress Mawra Hocane revealed a screenshot of her WhatsApp discussion with her mother. The mother of the Sanam Teri Kasam actress can be seen showering her with love during the discussion. 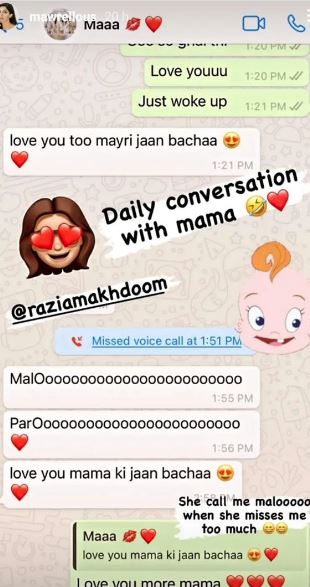 Pakistani actress Mawra Hocane's birthday celebration is not over yet as the...

One stunning dress styled in three unique ways - Who pulled it off better?

Pakistani actresses have always left their fans awestruck by their stunning beauty...

Prompted as a biopic for the first woman in the history of...

KUWAIT CITY: A fire broke out on Monday in Kuwait's largest oil...

People typically cry while watching farewell videos at airports, and now one...

The most awaited match of the ICC T20 World Cup between two...