Looks like aside from the general public, Sadaf Kanwal does not have many fans in the entertainment industry. Ace designer Mohsin Naveed Ranjha spilled the tea. In a recent interview, the designer recalls the incidents of the Kaif o Suroor item girl’s unethical behavior in a recent interview.

The subject came up as Mohsin Naveed Ranjha told about the professionalism of celebs he worked with. He recalls an instance when he was doing a largescale show with Sadaf Kanwal, Aimal Khan, and two Sri Lankan models. While the other three models maintained professional conduct, Sadaf Kanwal did not.

He voiced how she seemed to act that way in an attempt to prove that she was somehow better than others. Mohsin said, 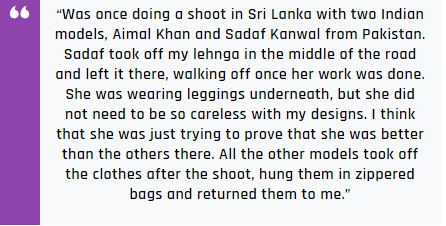 Mohsin Naveed Ranjha says he could have pressed legal charges, if there had there been any damage to his couture due to negligence.

On the other hand, the designer previously praised how Indian celebrities including Ranveer Singh was highly professional with being regular while they worked for him.

BEIJING: Chinese developer Evergrande will resume trading in Hong Kong on Thursday, it...

ISLAMABAD:  The Supreme Court of Pakistan on Wednesday ordered investigation into delay in...

ISLAMABAD: The third meeting of the Pak-China Relations Steering Committee on Wednesday...