Aima Baig spotted with Bohemia in Bahrain, are they collaborating for a new song?

Pakistani singer Aima Baig recently spotted with Bohemia who is a Pakistani-American rapper, songwriter, and record producer. The two singing sensations can be seen walking together in Bohemia and hinting at their collaboration for a new song. Bohemia’s popular songs included Same Beef Dua Karo Punjabi Mashup and Kali Denali. 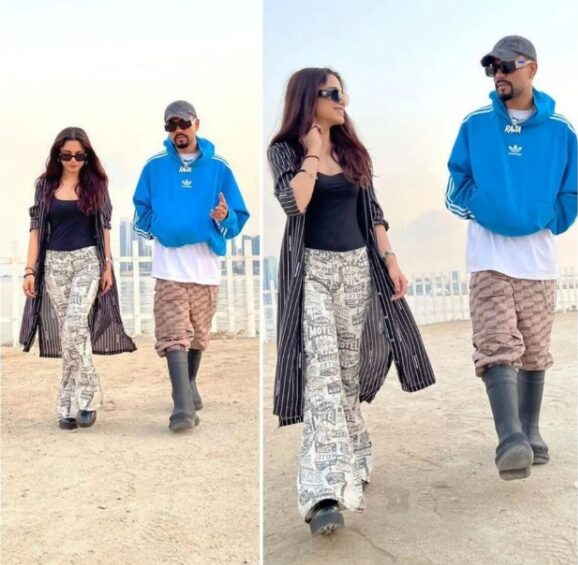 Earlier, Aima was in hot water by the girlfriend of model Qes Ahmed said that Aima Baig cheated on her ex-boyfriend Shahbaz Shigri with him.

After that, Taloula Mair accused him of having an extramarital affair with Nimra Khan. She responded,  “I wouldn’t be surprised about it because he was cheating on me with her last year even before Aima Baig and then it was Aima Baig, so it makes sense that he ran back to her, it’s obvious that he had to run back to her as last option and exploit her, although he doesn’t like her, even his family bitches about her.” when a fan revealed that Qes Ahmed is dating Pakistani actress Nimra Khan and has even In her Instagram story, Taloula said these things. Dialogue Pakistan reported the news.

According to her most recent stories, Nimra Khan, an actress, hasn’t hurt her in any way, so there’s no need to criticize her; just give the girl a break, she said, adding that no one can tell you what to do when you’re in love because you’ll just go ahead and do it. She described Qes Ahmed as being toxic. Here are a couple screenshots from her article where she claimed not to have a problem with Nimra Khan, but in her question-and-answer session, she did warn her about a poisonous man.

Jennifer Garner and Jennifer Lopez to celebrate Christmas together