Two more people have died because of dengue in Quaid’s city, Karachi.

137 more dengue victims in the city of Karachi. Four more dengue cases came from other districts of Sindh.

The number of dengue victims in the province has increased to 14,317 this year.  Over 13,330 citizens have been affected by dengue this year in Karachi. 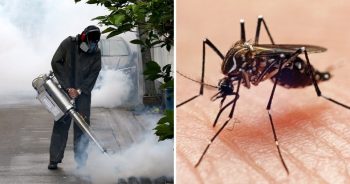 This year so far around 37 deaths from dengue are recorded. Last year, 2,888 people were affected by dengue, of which two died.

Rejuvenate Your Scalp With The DIY Scrub

Your scalp also needs to be treated with love and care. For...

It can be an arduous task to maintain good oral health and...

Get In Shape For Wedding Season Doing These 5 Exercises

With the wedding season being right around the corner, preparations and celebrations...

This Little Legume a big ally for a healthy heart

People who are at risk of a heart attack can cut their...

This Winter Treat Yourself With Carrot & Beetroot Soup

The nutritious soup of carrot and beetroot is the only answer during...

The seasonal harvest of winter has arrived and it totally makes the...

Rejuvenate Your Scalp With The DIY Scrub

Your scalp also needs to be treated with love and care. For...