A group of eight men from London started their journey to Medina through bicycle on 7 June this year and have finally reached Medina to perform Hajj rituals, they named their journey “Tour De Hajj”.

Under this journey they traveled 4000 miles, 17 countries and took 60 days to reach their holy destination with a break to fly Egypt by skipping the war torn Syria & Iraq.

At the same time along with the journey they were doing charity work also.

They aim to raise $6,28,600 in donation to build Wells, Schools and Mosques in the villages of Pakistan, Sri Lanka and South Africa through the ride. 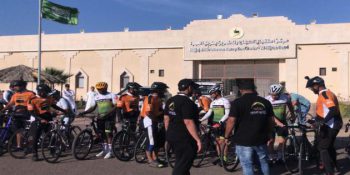 This journey garnered a huge attraction from national as well as international media and they are getting full media coverage.

While the riders arrived in Turkey, President Recep Tayyip Erdogan welcomed them at his presidential office in Dolmabahce, Istanbul.

The journey was indeed fabulous and adventurous, they are on such a journey that will bring them closer to Allah and will increase their rewards.

Moreover, the charity work is also appreciable and will help those poor people who are not enough fortunate to live a decent life.

Cinemas In Abu Dhabi To Reopen With Limited Capacity

In the United Arab Emirates, it has been decided to reopen the...

India Rejects US Report That Downgraded Its Status To ‘Partly Free’

A leading American think tank had said in its report that Modi...

On the annual International Women's Day, Google pays tribute to all the...