Daughter of the former Chief Minister of Indian Occupied Jammu and Kashmir, Mehbooba Mufti said that the Prime Minister of Pakistan’s UNGA speech has made a positive impact on the besieged Kashmiris of India.

According to details, Iltijia Mufti, in her interview, said that the Pakistani Prime Minister’s speech at the United Nations General Assembly made the Kashmiris come out on the streets and the impact left Kashmiris wondering whether the decision of staying with India after independence was right.

She stated that Kashmiris felt moved and found the speech very positive, the youth in Kashmir harbors negative emotions against the state of India due to the decades of subjugation that they had been enforced to live under. 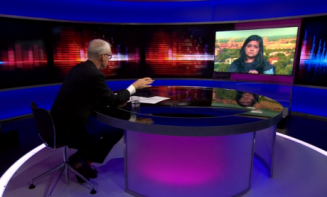 India has turned into Lynch-istan, those that inflict atrocities on the Muslims of Kashmir are praised as heroes in India, she added.

Mehbooba Mufti further went on to say that the world will know India’s reality if the communications are restored, the world will see how children were brutally tortured.

Her statement came out after Prime Minister Imran Khan’s speech at  the 74th session of the United Nations General Assembly in New York last week.

The core issue which the Premier talked in most detail about was the persecution which the people of occupied Kashmir are facing.

Strict Surveillance Of Dozens Of Mosques In France

India has summoned the Canadian ambassador and recorded protest on Prime Minister...

The second and final eclipse of this year will take place on...

Why Queen Elizabeth II is heartbroken?

The U.S space agency NASA unveils a contract with four corporations to...

Coronavirus: What will Biden do in first 100 days?

US President-elect Joe Biden has said that he will direct Americans to...

The Pakistan Army has offered respect to the nation’s pride Major Muhammad...

To go on the BBC's 'Hard Talk' program proved costly to former...

The 13th International Urdu Conference has kicked off at the Arts Council...