A US journal has titled Indian Prime Minister Narendra Modi as a threat to Indian economy.

Western businesspeople are still inclined to defend the Indian prime minister. Even if Narendra Modi is bad for democracy, they say, his pro-business philosophy is good for the economy.

But that argument no longer washes. India’s economy is incompetently managed and doing badly. 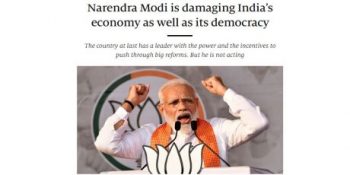 The report suggested that the growth fell from 8% in the middle of last year to 5% year-on-year in the most recent quarter.

Stories of the lockdown in Indian occupied Jammu & Kashmir and the threat to strip millions of poor and mostly Muslim people in Assam of citizenship, a form of ethnic cleansing by bureaucracy, have seeped into the world’s consciousness.

According to the report, India needs to grow fast just to keep its vast workforce fully employed. Worse, the slowdown looks less like a dip than a prolonged cold shower.