According to a foreign news agency, government candidate Sujith Prima Dasane has conceded his defeat in the last day’s presidential elections and congratulated his rival Gotabaya Rajapaksa on the victory.

According to the Sri Lankan media, Gotabaya Rajapaksa got 54% votes in the elections.

According to media reports, the announcement of the victory of Gotabayaraja Paksa has not been announced at the official level, but a spokesman for Gotabaya Raja Paksa has declared victory in the elections. 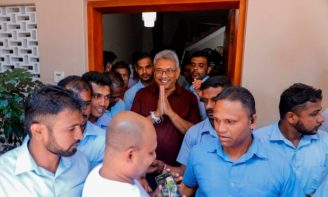 Sharing the Twitter post before the official announcement, Rajapaksa said that although official results have not been announced yet, we are now on the verge of victory.

The tweet said that we were going to launch a new trip to Sri Lanka, but we must remember that the entire Sri Lankan people are part of this journey. Let us celebrate peacefully with dignity and discipline in the manner in which we have campaigned.

Gotabaya Rajapaksa has been secretary of the defense ministry under the patronage of his brother Mahendraja Paksa.