New Zeeland: At least 5 tourists have been killed when a volcano exploded while dozens were stored and disappeared.

According to the International News Agency, a volcano exploded in the island of New Zeeland on the White Island, killing 5 tourists and destroying the island.

Deputy Police Commissioner John Tims said, there were more than 50 tourists on the island during this natural disaster. The volcano erupted that left 5 tourists dead. 23 tourists have been evacuated from the injured, of which 7 are said to be in critical condition.

My god, White Island volcano in New Zealand erupted today for first time since 2001. My family and I had gotten off it 20 minutes before, were waiting at our boat about to leave when we saw it. Boat ride home tending to people our boat rescued was indescribable. #whiteisland pic.twitter.com/QJwWi12Tvt

The eruption took place with little warning early Monday afternoon local time while dozens of tourists from nearby cruise ship Ovation of the Seas were touring the volcano.

New Zealand is located in one of the world’s most tectonically-volatile regions. Vulcanologists said that while the eruption was relatively small compared to other past disasters, anyone close to the site would have been in serious danger. 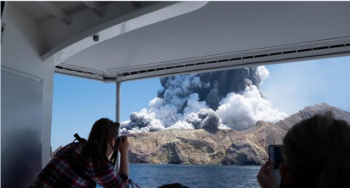 Raymond Cas, emeritus professor at Monash University’s school of earth, atmosphere and environment said, “White Island has been a disaster waiting to happen for many years. Having visited it twice, I have always felt that it was too dangerous to allow the daily tour groups that visit the uninhabited island volcano by boat and helicopter,”

Associate professor Derek Wyman, a geoscientist at Sydney University, said he was surprised tourists were allowed so close to the site, given its recent history.