According to the details, Gandhi’s statue was erected at Hazaribag in 1948 in Jharkhand and 10 days after death anniversary of Gandhi, his statue was desecrated and broken into pieces. 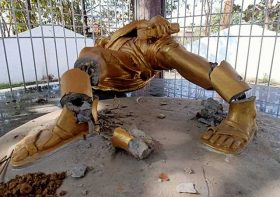 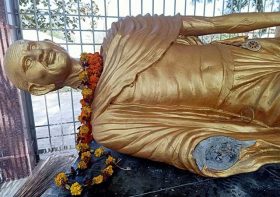 police started an investigation soon after the incident was reported .

Police said “an FIR has been filed against unknown persons in connection with the desecration and further investigating  is underway. We are also checking CCTV footage and questioning some people in the area,” the Police added.

The statue was built at the Gandhi Ghat by the bank of the Konar river where ashes of Gandhi were immersed as per the cremation method which is one of the funeral method of Hindu religion.

Hazaribag Deputy Commissioner Bhuvanesh Pratap Singh said “a new statue will be erected there soon, as the 150th birth anniversary of Mahatma Gandhi is being celebrated.”

He said an inquiry has been ordered to identify the culprits and a magistrate along with policemen deployed at the spot.

It is to be noted that Gandhi was assassinated By Nathu Ram Godse who shot Gandhi in the chest three times at point blank range in New Delhi on 30 January 1948.

Godse was a Hindu nationalism and RSS member, who believed Gandhi to have favored the political demands of India’s Muslims during the partition of India.

Indian Prime Minister Narendra Modi’s ruling BJP which is the successor of the RSS has been trying to degrade father of Indian nation ever-since it has come into power.

The BJP has been glorifying the assassin of the Gandhi who was opposed to Hindutva philosophy.

The ground has been set for the 11th general elections in Azad...