Israel’s Prime Minister Netanyahu has claimed success in the general election after he was put ahead of Benny Gantz by exit polls.

Mr. Netanyahu’s right-wing Likud party was given 36 or 37 seats and Mr. Gantz’s centrist Blue and White alliance between 32 or 34 seats by three projections.

Note that Monday’s election was the third general election in less than a year in Israel.

According to an international news agency, Benjamin is the longest-serving leader in Israel. He took the charge from 1996 to 1999 and then from 2009.

Both Netanyahu and Beny Gantz made it win the majority of 120-seat parliament after the last two rounds.

According to the pre-election polls, Netanyahu and Benny Gantz have nearly tied, but none of them are sure to a clear path to success.

But initial results suggest that the current Israeli Prime Minister is leading with three to five more seats. 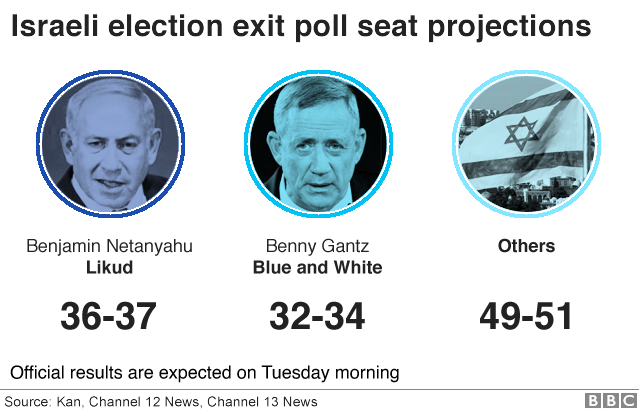 Israeli Prime Minister Benjamin Netanyahu dropped his bid for parliamentary immunity from prosecution on corruption charges, exposing the embattled leader to a possible trial that would decide his personal and political future, BOL News learnt on 30th January.

According to the details, Israel’s attorney general had filed a formal indictment in court against Prime Minister Benjamin Netanyahu.

It came after Mr Netanyahu withdrew a request for parliamentary immunity from prosecution on charges of bribery, fraud and breach of trust in connection with three separate cases.

Netanyahu, in power continuously since 2009 and before that in the 1990s, has dominated Israeli politics for a generation, decisively turning the country to the right. He has denied wrongdoing in the three graft cases, saying he is the victim of a political witch hunt.