“I’m confident that we will emerge victorious”, says Joe Biden

“I’m confident that we will emerge victorious”, says Joe Biden

As Democratic party’s Joe Biden witnesses a clear victory ahead of US Presidential elections 2020, he expressed his confidence to be the President-elect.

In his address, Joe Biden said that he feels confident enough to gain the victory of Presidency.

Following a series of his addressing on Twitter, Donald Trump’s competitor said, “I’m confident that we will emerge victorious. But this will not be my victory alone. It will be a victory for the American people.”

I’m confident that we will emerge victorious.

But this will not be my victory alone.

It will be a victory for the American people. pic.twitter.com/ZqJBVsQuQf

The counting of all electoral votes completed in Michigan for US Presidential...

Biden further mentioned that he will not leave the one’s alone who did not cast vote in his favour.

However, Joe Biden has won the state of Michigan and Democratic nominee adds 16 electoral votes to his column in the presidential race.

The win gives Biden 264 electoral votes. Having further votes from the remaining states would let him reach 270 electoral votes and he would be president-elect. He only needs more six electoral votes to be the President replacing Donald Trump.

On the other hand, the now President, Donald Trump still needs 56 electoral votes to gain the victory as he took 214 votes until now. 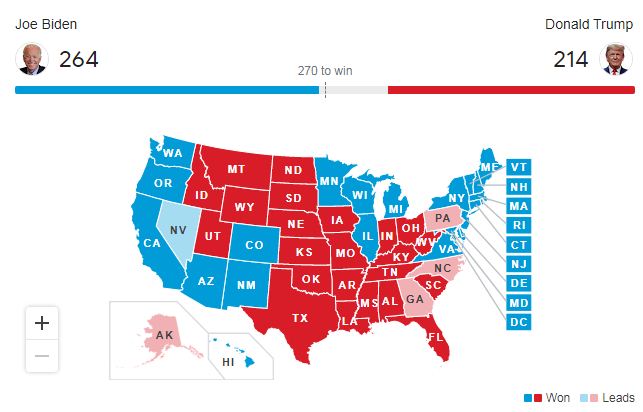 On Wednesday, Joe Biden won in Wisconsin by 20,697 votes. 45% results had been announced so far In Alaska, Trump had a lead of more than 51,000 votes over Joe Biden 95% results in Alaska.