In the midst of an outbreak of violence by Israeli forces that has already taken the lives of over 100 Palestinians, the Israeli military on Saturday bombed a building hosting many foreign media offices, including those of the Associated Press and Al Jazeera, destroying it to the ground.

According to Al Jazeera and the AP, Israel had issued a “warning” that it will launch airstrikes against a building that houses their offices and other foreign media outlets in Gaza City.

Israel’s bombardment in #Gaza continued for a fifth consecutive day, with Israeli air raids hitting a refugee camp where several Palestinians, including children, were killed.

“The airstrike Saturday came roughly an hour after the Israeli military ordered people to evacuate the building. There was no immediate explanation for why the building was targeted. The building houses the Associated Press, Al-Jazeera, and offices and apartments.”

Fares Akram, AP’s Gaza correspondent reported that the bombs falling on their office. 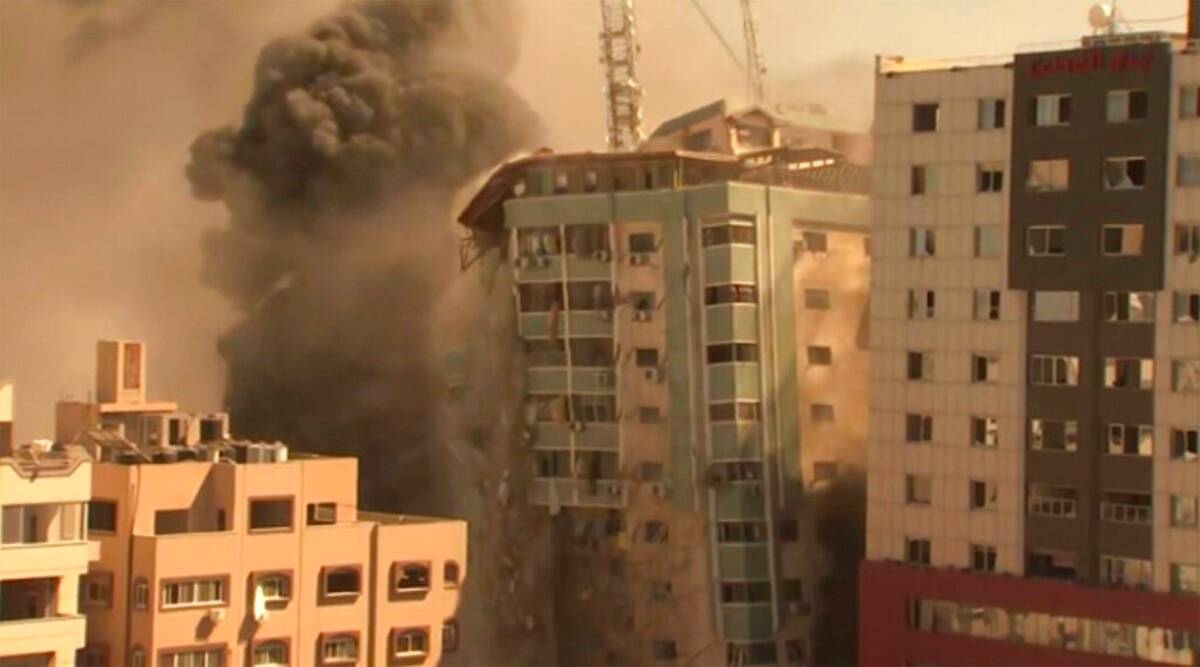 “We ran down the stairs from the 11th floor and now looking at the building from afar, praying Israeli army would eventually retract,” he tweeted.

And now bombs could fall on our office. We ran down the stairs from the 11th floor and now looking at the building from afar, praying Israeli army would eventually retract. https://t.co/WU2eLEX7kn

“Israel has given a “warning” that it will bomb the building that houses Al Jazeera offices and other international media channels in Gaza City in one hour…our colleagues have already evacuated.”

Earlier on Friday, Israel continued to bombard the Gaza Strip with airstrikes and shells, shutting eyes to international condemnation, killing more than 100 people.

According to the media reports, the latest fatalities bring to 113 the official death toll, including at least 31 children.

Residents of northern Gaza, near the Israeli frontier, said they had seen no sign of Israeli ground forces inside the enclave but reported heavy artillery fire and dozens of airstrikes.

Israeli security forces have also been scrambled to contain deadly riots between Jews and Arabs, and projectiles have been fired from Lebanon.

The United Nations said the Security Council would meet on Sunday to address the conflict as the world body’s Secretary-General called for “an immediate de-escalation and cessation of hostilities”. “Too many innocent civilians have already died,” Antonio Guterres tweeted.

“This conflict can only increase radicalization and extremism in the whole region.”

Out of respect for the spirit of Eid, I appeal for an immediate de-escalation and cessation of hostilities in Gaza and Israel. Too many innocent civilians have already died. This conflict can only increase radicalization and extremism in the whole region.

Israeli Prime Minister Benjamin Netanyahu in a statement on Friday said the Israeli military operation against Palestinian militants in Gaza would continue for as long as necessary. He said Hamas, the Islamist group that rules Gaza, would pay a heavy price.

Prime Minister Imran Khan on Thursday held a telephonic conversation with the...