Preparations are underway for a Pakistan Democratic Movement (PDM) rally in Karachi’s Bagh-e-Jinnah on October 18.

Three different stages have been set up for the rally, while traffic police have also announced alternative routes.

Vehicles will not be allowed near the venue. Preparations for the PDM Power Show in Karachi on October 18 are in full swing.

Three stages are being constructed in Jinnah Garden. The main stage is 80-60 feet which has been prepared for the central leaders while two more 40-50 feet stages have been prepared in the same place on which other leaders will sit.

According to the administration, 50,000 seats have been arranged in the hall so far and a security wall has been set up by placing containers around the stage. There is barbed wire in front of the stage. 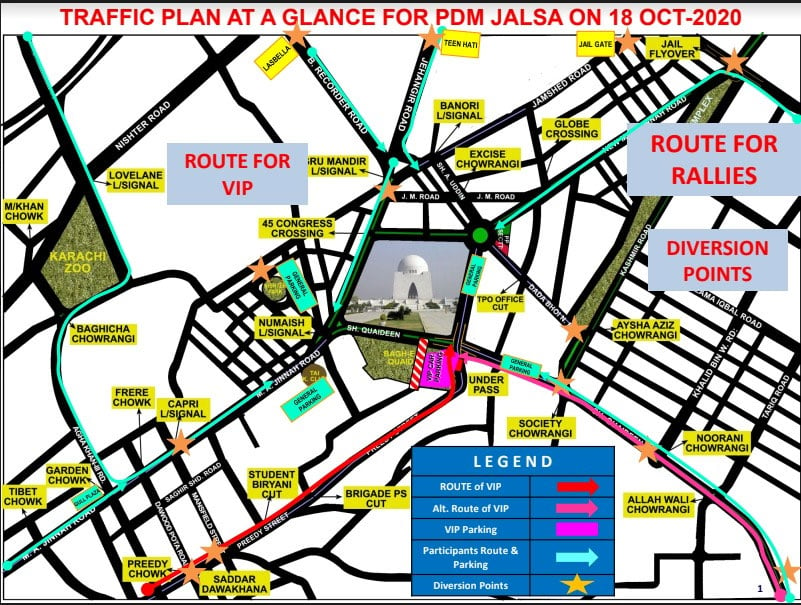 On the other hand, the traffic police have announced a traffic route plan. Regular citizens will not be allowed to travel from Jamshed Road and Teen Hatti.

Heavy traffic coming from Nazimabad and Teen Hatti will not be allowed to go to Gurmundar, small vehicles will be allowed.

I want Opposition To hold Protest Every Day And be Exposed to People: PM

Prime Minister Imran Khan has said that the movement of opposition will...

According to the traffic police, participants from Hyderabad will be able to reach the venue from the water pump and Liaquatabad.

Participants from Central District will be able to park their vehicles at the Nishtar Park or Tai Karate Ground from Gurmundar to the venue.

Participants coming from West District will be able to go to the meeting hall via Pak Colony, Garden Chowk, Saddar Dawakhana.

Participants from Thatta and Malir and Sharqi districts will be able to park their vehicles near the resident engineer’s office from PP Chowrangi and reach the venue.

Traffic police have allocated space for parking of vehicles. Participants will be able to park their vehicles at Nishtar Park, Tai Karate Ground and Shara e Qaedeen Underpass. Parking will also be available at Resident Engineer Mazar-e-Quaid on Corridor 3.

The brand new Orange Line Metro Train project was planned under the...

Heatwave to prevail in Karachi for the next four days

Pakistan Meteorological Department (PMD) has predicted a moderate heatwave to prevail during...

Tomatoes, onions to import from Iran due to high prices in Pakistan

Due to high prices in the country, Pakistan's government has decided to...

The Administrator Karachi Iftikhar Ali Shallwani has given directives to put all...