No doubt, the hit series Mere Paas Tum Ho is one of the plays that has captured the attention of drama lovers nationwide. From cast to story line to dialogue, every aspect of this series came under discussion.

Many criticize the play and writer whereas others enjoy it just like any other TV series. After several plot twists, Mere Paas Tum Ho is going to end. Since it was a big project and got fame widely too, the ending is going to be grand as well.

Not to mention, the drama featuring Humayun Saeed and Ayeza Khan got immense popularity and to keep the viewers’ and fan’s curiosity levels high, the team of the show had decided not to air its last episode on TV. It won’t be available on YouTube as well. The last episode of the mega-hit series will be screened in cinemas across the nation. After nerve-racking plot twists in the series, this decision came as a shock too. In a TV show, the team of Mere Paas Tum Ho revealed that earlier they wanted it to make a movie but couldn’t decide. Airing it on the big screens will be an experience of its kind. The fans are going to remember the show for a long time too.

Considering the hype and response, the directors and producers of the series opted to give one final dose of entertainment to fans by screening it in cinemas across the country. Not only this, the cast and crew of the mega-hit serial will also be a part of this special screening. They along with the guests will watch the last episode at Nueplex cinema’s DHA branch. Nueplex cinema has a different seating arrangement that can accommodate more and more fans. From 8:00 pm onwards, the movie theatre will only show Mere Paas Tum Ho. They have a show in the open-air section at 10:30 too.

Fans who haven’t missed a single episode of the play and people who started to watch it after a massive response was thrilled to watch the last episode of Mere Paas Tum Ho in the cinema. And, unbelievably all tickets are sold. According to details on the Box Office website, Rs1.5million advance sales of the tickets have been reported. Most of the sales were reported from Cinepax. The high number of sales was recorded from Karachi. Lahore stayed behind in the advance sales. Each ticket costs around Rs.800.

The last episode will be a double episode. So, all your guesses are going to reveal soon.

Fans and critics have been guessing the end for a long time now. However, only the final episode will reveal what happens with the characters in the play.

Well-known artists from Pakistan’s drama industry acted in the mega-series.

Khalil-ur-Rehman Qamar wrote the series. He has written several dramas that his fans enjoyed and celebrated.

The feminist community didn’t welcome the storyline and dialogues. The harsh dialogues about women sparked anger. And, many viewers questioned the misogynist mindset of the writer.

Despite its fame, Mere Paas Tum Ho has ended up being a controversial show. Many people including the ones who watched the series seemed upset with the comments of Khalil-ur-Rehman Qamar which he made on national television.

A lady named Maham through her lawyer filed a petition in Lahore civil court to stop the screening of the last episode of overwhelmingly popular drama. The lady has stated that the story of Mere Paas Tum Ho has been promoting the negative image of women and degrading them.

A local news channel reported that the production team of the play argued that the drama was made to discourage honor killing in such cases. After the hearing on Friday, Naila Ayub, civil court judge has given the green signal and the final episode will be going to air as per schedule. 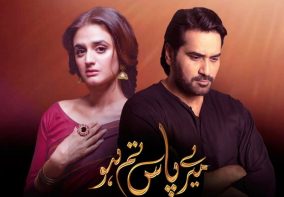 The cast, dialogues and even controversies became news instantly. The storyline of the series successfully grabbed the attention of drama lovers, critics, activists and others. Mere Paas Tum Ho didn’t only entertain the local audience but it was equally thrilling for the international viewers too.

Infecting mosquitos with a certain species of bacteria can protect them from...