Pakistan’s fishermen are using prohibited fishing nets that cause traumatic damage to marine life in the Arabian Sea.

According to the details, Fishermen are caught red-handed by using prohibited nets and in Ibrahim Haideri – an area of district Malir in Karachi.

These fishermen are using Gujja and Bola nets (prohibited by the United Nations) in the Korangi creek which in nesting place for shrimps and fishes.

Korangi creek is a natural nursery for the eggs of fishes and shrimps and fishermen involves in illegal hunting using a prohibited net in the said area. This practice is putting the breeding of shrimps and other marine life in serious threat.

Baloch posted a video on social media site Facebook – in which he has shown fishermen with baskets full of brine shrimps and they were selling them Pkr 20 per kilogram.

He wrote a caption with the video and said these people are destroying marine life in the Arabian Sea and illegal hunting will put marine life in danger.

He also wrote that using prohibited nets is illegal in Pakistan and its complete failure of the government of Sindh and Sindh fisheries department.

It is pertinent to remember that Sindh and Baluchistan are the only provinces having a coastal line in Pakistan. Baluchistan assures preventing the use of the prohibited fishing net by fishermen – so marine life and ecosystem of our coastal areas can be safeguarded.

A survey conducted back in 2008 showed that the production of various valuable fishes and shrimps was decreasing on a daily basis.

The annual average catch of shrimp, a most valuable item in Sindh, once caught was 27,541 tons, 97 percent of the total national catch, but now had dropped drastically.

It has also observed that overfishing by foreign deep-sea trawlers and usage of banned nets in the creeks had also contributed to the destruction of some fish species. 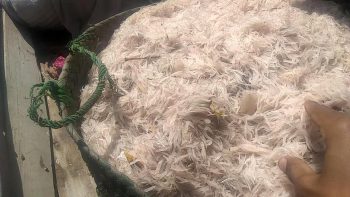