The Bachchan family avoids bumping into Rekha in public events and parties. But Bachchan bahu Aishwarya Rai perhaps thought otherwise as she always was seen greeting Rekha with a warm hug and a kiss on the cheek whenever they met. According to reports, mother-in-law Jaya was not happy with Aishwarya’s closeness with Rekha. Aishwarya Rai Bachchan has been living with her in-laws since she got married with Abhishek Bachchan in 2007. On and off, media have reported small tiffs between Aishwarya and her mother-in-law Jaya Bachchan.

During the prayer meet of actress Shammi,  Aishwarya and Jaya were captured on camera and their actions have clearly put all the spat speculations to rest. After offering their condolences to Shammi’s family, Aishwarya not only escorted her mother-in-law to her car, but also shared a warm hug with Jaya. On many occasions, Jaya has been seen praising her daughter-in-law even before she became a part of the Bachchan family.
Jaya had said in an interview “Aishwarya is lovely. I love her. I have always loved her. I have never seen her push herself we are all together. I like that quality of hers. She is quiet. She listens and she is taking it all. another wonderful thing is that she has fitted in so well in the family” 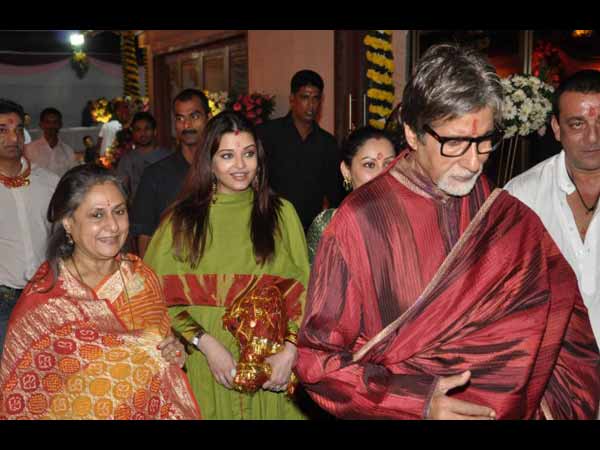 Abhishek Bachchan discussed his mother and wife’s bonding, said ” Ma and Ash gang up against me and they keep rattling on in Bengali. Ma knows Bengali and Aishwarya had worked with Rituparno Ghosh in a Bengali movie Chokher Bali, so she also can speak the language properly. Therefore, whenever they have to team up against me, they start talking in Bengali”