The letter from Bahrain’s Ministry of Transportation and Telecommunications has sought clarification from the Civil Aviation Authority on the questionable pilot’s license.

According to details, a letter has been written by the Ministry of Transportation and Telecommunication of Bahrain to the DG Civil Aviation.

Pakistan International Airline (PIA) has been banned in Europe following a fake...

The text of the letter also raises concerns from the government of Bahrain about Pakistani pilots working in the Gulf Air.

It should be noted that the letter has been written by Deputy CEO Gulf Air Muhammad Qabi and it has been asked to confirm the licenses of CAA pilots and engineers and provide details. 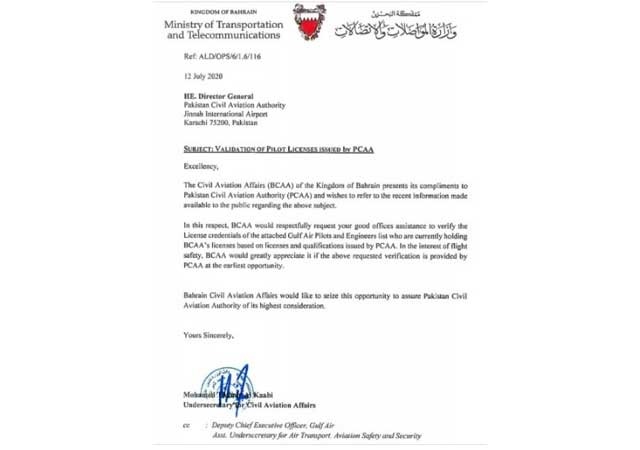 While Pakistani authorities are verifying the credentials of their pilots, Malaysia’s aviation regulator says it has temporarily suspended pilots with Pakistani licenses employed by local airlines.

Note that Federal Minister for Aviation Ghulam Sarwar Khan had disclosed in Parliament that 262 pilots of Pakistan International Airlines had obtained ‘suspicious’ licenses, after which aviation authorities of different countries had issued notices to Pakistani pilots and Certificate of Engineers Degree is required.

The Malaysian Civil Aviation Authority (CAAM) said in a statement that the decision was made after screening all foreign pilots in Malaysia.