The government of Sindh has unveiled a Joint Investigation Team (JIT) report on a 2012 fire at a garment factory in the Baldia Town area of ​​the provincial capital, Karachi.

Initially, access to the JIT report on the Sindh Home Ministry’s website was difficult. But now it has been completely restored.

The JIT report includes details of the incident as well as statements from other accused, including Baldia factory owners.

According to the JIT report of Baldia Factory, the incident was “terrorism” and was allegedly carried out by the MQM’s Karachi organizing committee chief, Hamad Siddiqui.

A fire broke out in a denim factory near Hub River Road in Baldia area of ​​Karachi on September 11, 2012, killing 259 workers and injuring about 50 others.

The JIT report, made in June 2015, two and a half years after the incident, came to light five years later.

The report recommended that the FIR was filed based on”dishonesty” due to the internal and external pressure which turned the act of “terrorism”  into a normal fire incident.

The demand for Extortion of Rs 200 million

At the beginning of the report, a map of the factory was given stating that the factory, which was built on about 47,000 square yards, had a basement, ground, mezzanine and another floor.

The ground floor had a warehouse and washing area, the mezzanine had a wooden floor with iron girders, a stitching unit on the first floor and a similar unit on the second floor.

Ali Enterprise owners Arshad Bhaila and Shahid Bhaila recorded statements in Dubai before the JIT as the two brothers had moved to Dubai a few months after the incident.

The owners’ statement indicates that the matter has been under discussion for several months. According to the statement, two or three months before the incident, in May-June 2012, Shahid Bhaila met Majid Baig, brother of Asghar Baig, in-charge of MQM Bladia town sector, in the office of production manager Mansoor.

Majid said that the sector in-charge was demanding crores of rupees in terms of extortion money.

In the same period, Asghar Baig was removed and Rehman Bhola was appointed in-charge of Balia town sector.

On the night of July, he visited the office of the factory’s production manager, Muhammad Mansoor. When they reached there, they saw that Rehman Bhola and Majid Baig were present, so they returned without saying anything.

As we were leaving the factory, Rehman Bhola came in front of the car and threatened to resolve the issue of extortion and contact Hamad Siddiqui, head of the MQM’s organizing committee in Karachi. He also talked about giving Rs 200 crore or a share in the factory.

“We called the production manager, Muhammad Mansoor, and told him what was going on. He assured us that he would deal with it, but we felt that Mansoor was quiet and nervous, so we told him,” he said. We gave one crore rupees and said go and solve the matter.

Production Manager Muhammad Mansoor in his statement to JIT admitted that the MQM sector in-charge was influential in factory affairs.

He said that huge amount of money was taken from the factory owners in the name of Zakat and Fitrana, in addition to the cut-price fee, money was collected in the name of party donations and he also had a role in hiring and dismissing employees.

According to Mansoor, Sector Incharge Rehman Bhola came to meet him on July 20 and at that time Arshad Bhaila and Shahid Bhaila had gone.

The next day, the owners told him that Rehman Bhola had demanded extortion of Rs. 250 million for the head of the organizing committee, Hamad Siddiqui.

The owners were upset. They handed over one crore rupees to me so that I could settle the matter. I tried but Rehman Bhola was not ready to take less than Rs 200 crore. He warned that if the sector did not get the extortion, the factory and the owners would face serious consequences.

Muhammad Mansoor has reiterated the same position in his statement to the magistrate.

He said that the cotton waste of the factory was picked up by Abdullah Memon and Irfan Baig through Majid Baig. Later he gave the contract to his niece Faryal on which Abdullah Memon had a bitter argument.

Wasim Dehlavi, who was associated with the MQM, often visited the factory and received paints and money from the factory as an Eidi. He also received zakat and Fitrana for the MQM.

Zubair worked in the finishing department, he was also an MQM worker and he also looked after the affairs of the factory workers.

The factory owners informed Asghar Baig, sector in-charge of the Baldia town, who along with his brother Majid Baig took him to Nine Zero in Azizabad where he met Hamad Siddiqui and Farooq Saleem, the head of Karachi Organizing Committee where they told them that they were the sympathizers of the party and informed them about the extortion.

Meanwhile, bitter words were exchanged between them, with Hamad Siddiqui and Farooq calling it “party policy” and refusing to give up the demand.

How did the fire erupt?

The JIT report states that the team made seven visits to the factory.

Accountant Abdul Majeed told the team in his statement that around 8.30 pm, Shahid Bhaila asked to bring the file from the office which was located near the warehouse of the factory.

At the same time, he smelled a strange smell which he had never felt before. When he came out of the office, he saw sparks of fire and in the blink of an eye, the flames rose. He got scared and ran towards the administration block.

The director arrived with the staff and ordered the main switch to be switched off to avoid a short circuit. He said it was so hot there that it was difficult to stand.

Production Manager Muhammad Mansoor also confirmed the statement and told JIT that on September 11, he was sitting in the office of Arshad and Shahid Bhaila when Abdul Majeed shouted that there was a fire in the factory and when he came out of the office, the fire spread. Abdul Majeed was sent to fetch the fire brigade which did not arrive after an hour and a half.

Zubair gave the black envelopes to his friends (which contained some material), which Zubair threw in the warehouse. The fire broke out in ten seconds. Everyone left the warehouse.

The JIT report further said that Arshad Mahmood along with 15 to 20 employees tried to put out the fire but the fire got out of control. He saw Zubair again after two or three minutes. When the fire reached the second floor, he heard the owners saying, “Don’t save the goods, save people.”

In a statement to JIT, Arshad Mahmood added that he ran towards the second block of the factory but the stairs on the second floor were blocked while the door leading to the canteen was also closed. Someone gave him the key to the canteen and when he opened the door, he was surprised that Zubair and some strangers were there.

Production Manager Muhammad Mansoor also confirmed the situation in his statement and said that factory workers Kashif and Shani saw Zubair and Wasim Dehlavi with some strangers in the warehouse where the fire broke out and some employees also saw them on the roof.

The JIT said in its report that the doors of the factory were not closed except for the warehouse from where the denim was transported.

The report also said that the workers who escaped from the factory have also confirmed this. 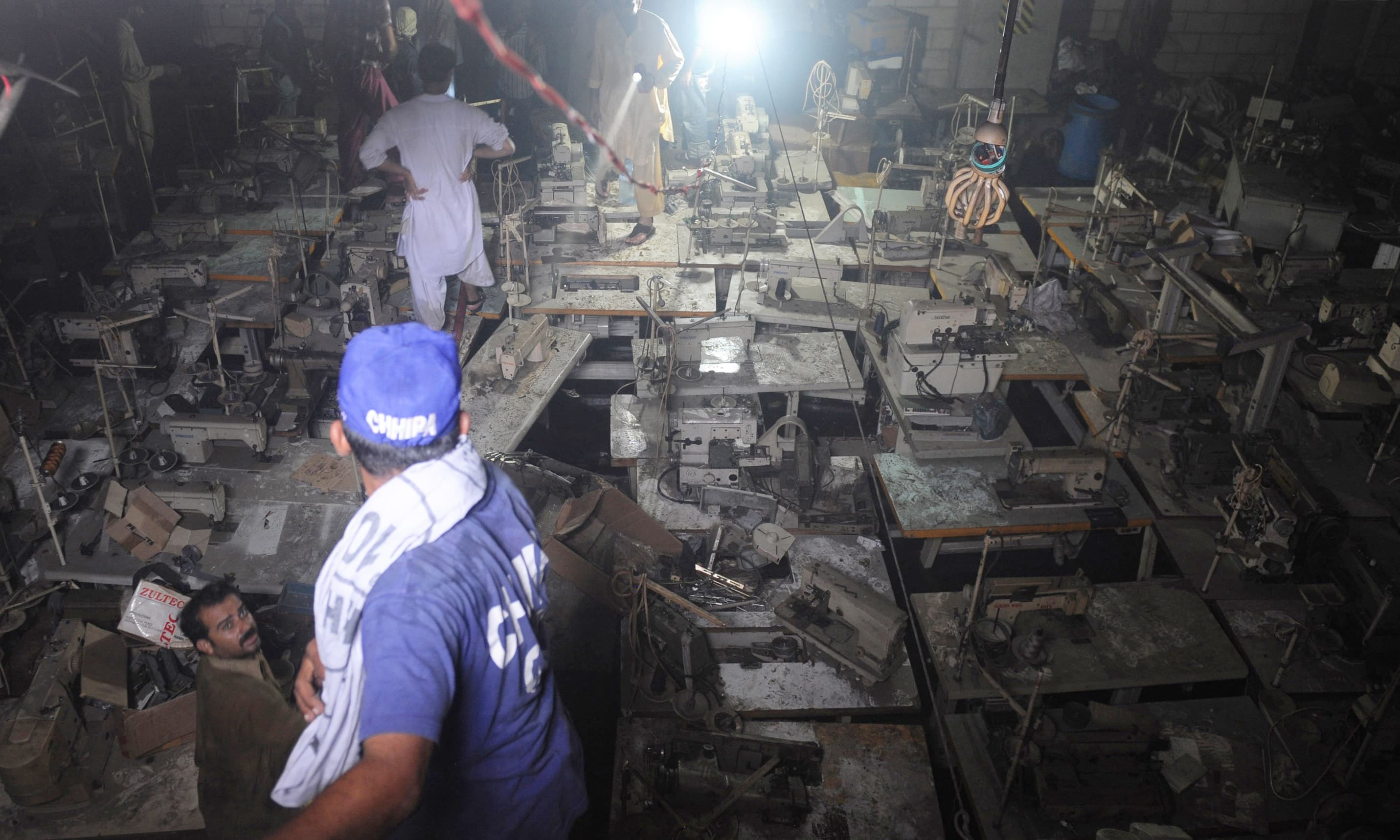 The lawsuit against Factory owners

CTD police raided and arrested Asghar’s brother Majid Baig. After pressure from MQM Altaf, the owners stated that Majid was not involved in the case based on which he was released.

Rizwan Qureshi told JIT that on the orders of the party’s top leadership, the former MQM provincial minister went to the police station and registered a case against the factory owners and the owners got bail from the high court but allegedly the former provincial minister used his contacts to cancel their bail.

Note that the anti-terrorism court had included former MQM provincial minister Rauf Siddiqui as the main accused in the factory arson case. According to the JIT report, Arshad Bhaila and Shahid Bhaila were under constant pressure so they decided to reconcile with the MQM.  They were taken to Hyderabad by businessman Muhammad Ali Hassan Qadri, who claimed to be close to the then MQM and now Pak Sarzamin Party central leader Anis Qaim Khani.

Qadri said after several contacts that all matters would be settled. They should pay Rs. 2.5 lakh per death and Rs. 1 lakh per injured. This amount should be credited to the account till MQM pays this compensation on its own, on which they agreed and they deposited Rs. 59 million.

The JIT report said that two-and-a-half years had elapsed since the incident, evidence had been erased from the scene and it was difficult to gather further evidence, and the case was still pending.

According to JIT, the evidence obtained from the scene was not sent to the concerned departments for an expert opinion. Whether the deaths were due to chemicals was not ascertained, the DVR of the video camera said. Records are not saved, important data is lost, geo-fencing of mobile phones and the call data recorder is not available for more than six months.

The victim was charged

The JIT has also raised several questions on the police investigation and said that the investigation was carried out in an unprofessional manner. This incident is an example of compromised policing of traditional police in which the accused were benefited and the affected party was presented as the accused.

The JIT said it tried to contact Zubair’s father abroad to find out his son’s position, but he did not cooperate.

The team wrote three letters to the DG Passport to revoke Zubair’s passport but no progress was made.

The JIT also recommended making arrangements for the repatriation of the fugitives, cancellation of their passports and further said that the money for the bungalow purchased in Hyderabad with the conciliation money would be returned legally.

The JIT also recommended reforms in police investigations, building control authority, civil defence, improvement in the labour department and training of factory workers to deal with such situations.

According to the sources, the Board of Secondary Education Karachi is probable...

Pakistan has reported less than 50 daily COVID-19 deaths for the first...