Xiaomi’s Mi 11 Ultra Is Getting An Ultra-Limited Release

Kevin O'Leary claims that investing in Dogecoin is worse than gambling

Mufti Abdul Qavi, the prominent cleric who always lands in different controversies. His new video is making rounds on social media. Mufti Qavi can be seen dancing with a woman in the video.

However, Mufti Qavi has denied the truthfulness of the video.

He said in a statement that,
“This video of me dancing with the Korean woman is fake.”

He went on to say that there is a lobby that has been working against him to tarnish his reputation ever since he issued “strong statements against Indian premier Narendra Modi for subjecting Kashmiris to inhuman torture and killing innocent people in the [Indian occupied] Kashmir valley.”

He said the group working against him had edited the video and uploaded a fake video “for the sole objective of widely defaming Pakistan and the religion of Islam”.

He said he never had wear “such a tight kameez as displayed in the video” and claimed that the video editor had “pasted my head on the body of someone else.”

But this is not the first time when Mufti Qavi had landed into any controversy. There are several cases in which Mufti Qavi was involved that are against Islam as well as society.

He was in the headline after he made remarks about “halal” alcohol, which according to him should be permissible if made from minerals such as spirits, petrochemicals, and other substances.

His remarks about the Halal Alchohol came after a Saudi clerics issued a fatwa deeming beverages containing 40% alcohol or less as halal.

“I got various calls from Europe a few days ago and some youngsters told me that Saudi ulema had deemed those beverages halal that contain 40% or less alcohol in them.”

“This is their [Saudi ulema’s] opinion. I will give mine. I would say that alcohol derived from minerals, such as spirits, petrol, and other substances, if it is applied on clothes or elsewhere, then it does not render them impure,” he added

“Now what is the Shariah status [on this matter], whether it [such alcohol] is halal in 100% [quantity] or less, this will be decided only after thorough consideration,” said Qavi.

Before that, to promote religious tolerance he had expressed his views on selfies, the lunar calendar, and legislation after bein arrested in the Qandeel murder case.

Model and social media star Qandeel Baloch, who was found strangled to death in her Multan’s house on July 16, 2016. Her father had claimed that Qandeel’s younger brother had killed her. However, more suspects were arrested including Mufti Qavi.

Qandeel Baloch uploaded selfies with Mufti Qavi wearing his cap and sitting close to him. After that, Qavi’s membership of the Ruet-e-Hilal Committee and the National Ulema Mushaikh Council was suspended.

Qandeel’s parents had also accused cleric Qavi of killing their daughter. Before her death, Qandeel told an international media organization that Mufti Qavi’s behavior was inappropriate and thought she would expose him as he is in reality.

“He is a different person alone and different when he has his followers around him,” Qandeel had said. 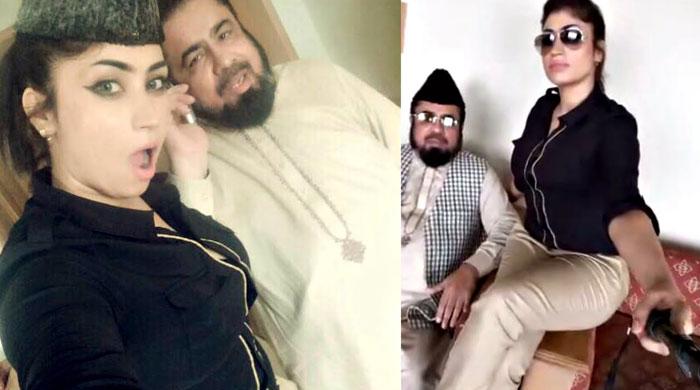 TikTok star Hareem Shah was also seen taking pictures with cleric Qavi. The pictures went viral on the internet and people got angry over Qavi’s love for selfies and pictures with young, beautiful girls.

Many claimed that Hareem will be dead after she posted pictures with Mufti Qavi.

The monkey took over the principal's chair, Watch interesting videos

Dr. Wajeeha's wedding day dance video, in which she was dancing while...