Changan Uni T: Everything You Need to Know About the New Crossover SUV

Changan Uni T: Everything You Need to Know About the New Crossover SUV

Changan Pakistan has been in the limelight as it has started testing three vehicles in the Pakistani automobile landscape.  The vehicles named Uni T SUV, Oshan X7 SUV, and pickup truck by the name of F70 have been making rounds on Social Media as audience gets excited on what’s to come.

As of now, we do not know which one of the three vehicles will launch first in the Pakistani market, our guess is that it will most probably be the Uni T SUV. The main reason is the fact that crossovers SUVs have taken the automobile market in the country by storm. Secondly, the unique and futuristic design of Uni T has garnered the most attention on Social Media and finally, the teasing words by Changan Pakistan are based on three words: “Future, Forward, Forever” which means they might launch Uni T since it’s a newer model amongst the three models.

The Uni T SUV is a crossover SUV which was launched in China in April last year. This C Segment compact crossover SUV would take on other competitors who have entered the same sub category of automobile market in Pakistan. The last two years have seen a sudden surge of companies entering the crossover SUV landscape with KIA Sportage enjoying the most success in the Pakistani market.

Talking about Changan Uni T’s competitors, we have amounted them to five: Hyundai Tucson, DFSK Glory, Proton X70, MG HS, and the much anticipated Toyota Corolla Cross. With such accomplished players in the market, can Changan Uni T hold its own? A look at the specs might give us a better understanding: 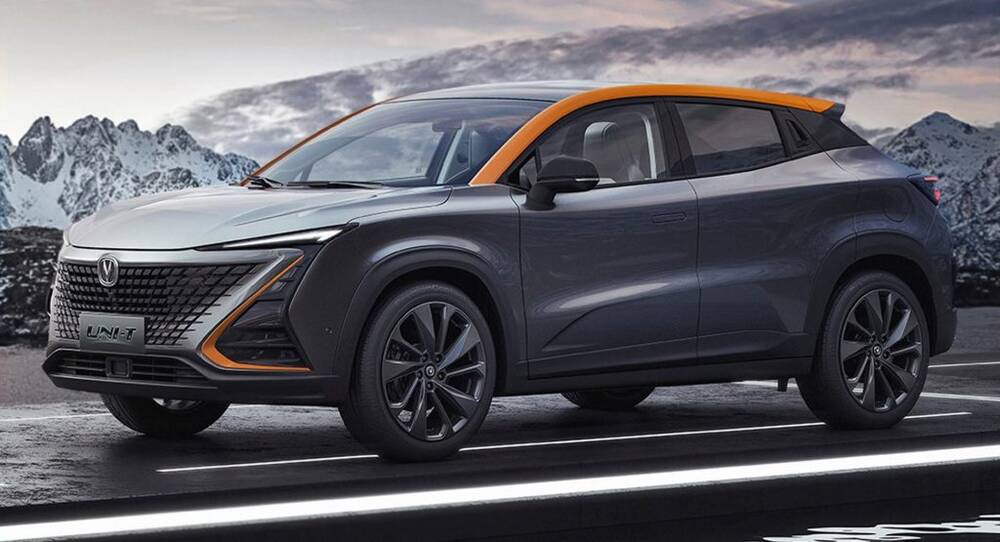 The design has been inspired by Changan’s Japanese and European competitors. The design team was given the target to come up with a revolutionary design and were given total reins to come up with the most progressive look.

Features in the front board include unique-looking body-coloured grille mounted in the bumper, sharp curved black panels on the sides that also house the headlights down below, and a pair of sharp daytime running lights (DRLs) that give the car an imperil yet fashionable look.

Coming towards the back, the most noticeable feature is the supercar inspired tailgate which is accompanied by a top-mounted rear spoiler giving the SUV a menacing look. The modern design sharp tail lights, sleek reflectors, and exhaust cut-outs in the bumper below compliment the aggressive design and makes it stand out from its other competitors. 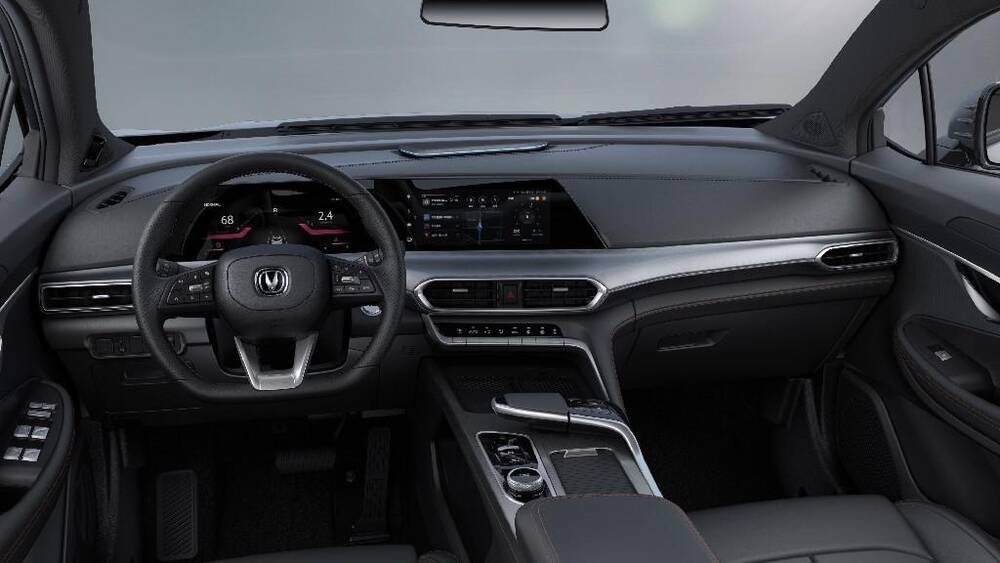 It is such a treat when a perfect design is complimented by an equally good interior. According to the images, the interior does look of high quality. Certainly inspired by the interior of a European luxury SUV, the Uni T holds a huge screen which covers almost half of the dashboard, a modern control panel in the middle, leatherette wraps and silver and chrome trim-piece.

As per the space, only two rows of seats are accommodated but they certainly look spacious and can accommodate five fully grown adults. The interior of Changan Uni T looks very impressive giving the car a complete look in terms of its design. 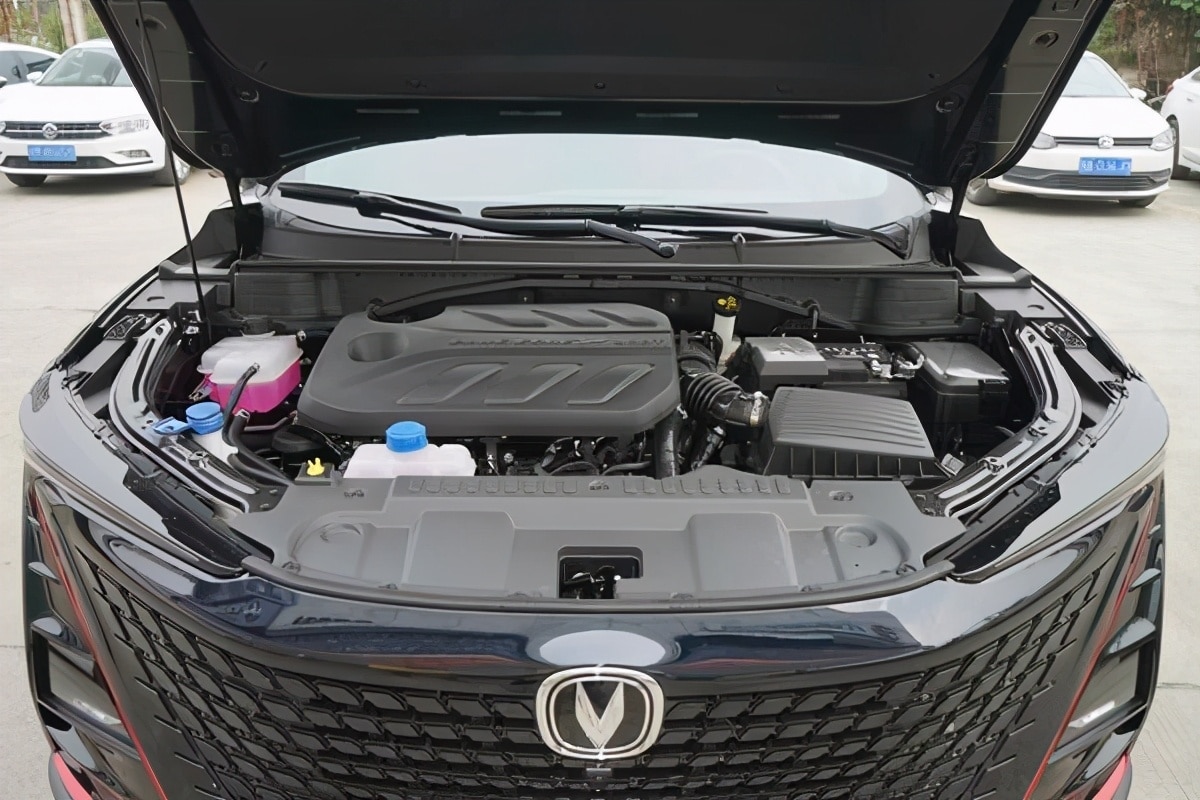 In China, the Uni T is being offered in three variants however all the variants come with the same engine – a 1.5 litre, 4-cylinder turbocharged petrol engine which gives an impressive 177 HP and 300 Nm of torque. The SUV comes in both 2-wheel (front wheel power) and 4-wheel drive and includes a 7-speed DCT automatic gearbox. There are rumours that Changan will introduce a sportier variant in the market with 2.0 litre engine.

The SUV features the trademark McPherson Struts suspension in the front and multi-link coil-spring suspension at the back. Along with ventilated discs up front and solid discs at the back, the car includes Anti-Lock Braking System (ABS) for stopping power.

Tested by the Chinese Ministry of Industry and Information Technology, the fuel economy of Uni T is around 6.3 litres per 100 km which translates to 15 to 16 km per litre. Bearing all this in mind, the new Changan SUV promises phenomenal performance along with an economical fuel average.

The Uni T is a modern first generation vehicle which promises newest features that ensure both safety and convenience to its owner. Here is a list of all the features of the top variant of Changan Uni T SUV:

Automobiles in Pakistan are available at exuberant prices which makes the ‘value for money’ factor hold a major place in the eyes of the costumer, especially when they have a variety of models to choose from.

The Changan Uni T in China starts from 120,000 Chinese Yuan which amounts to roughly PKR 28 to 29 lakhs (subject to the exchange rate) which is not too expensive compared to its competitors. The ‘fully loaded’ variant retails at 150,000 Chinese yuan which equals to PKR 25 to 26 lakhs.

However, since Changan plans to sell it in Pakistan, the vehicle might be sold as a CKD which means that the parts will be imported from China and the vehicle will be assembled here which can drive the price up.

Uni T includes advanced components such as an all-digital infotainment system and Head Unit Display which, if malfunctions, can be expensive to replace or repair. Another thing to note is that the Uni T runs on a turbo charged engine and if history tell us, turbo charged engines do not run properly on the RON91 fuel available in Pakistan as is the case with Honda Civic Turbo. Turbo engines ideally perform on hi-octane fuel which makes the running cost of the vehicle more expensive and if faced with a problem, can be very difficult and costly to repair.

The Changhan Uni T has all the tools to become one of the best crossover SUVs in the country. Its menacing and aggressive exterior design, a modern and comfortable interior, a sizeable engine and plethora of modern features makes it an ideal candidate to not only enter the SUV market with a bang but also dent the sedan market that has long been dominated by Toyota and Honda.

Dog brings one of the week's best moments to television

An overeager Labrador walked away, dragging the human at the other end...

Saniya Shamshad Hussain is a young Pakistani actress who is charming. Saniya...