In a tweet here the minister stated that the IMF program was required by unsustainable current account shortage and falling foreign currency reserves, and a vicious Covid 19.
He expressed appreciation for Prime Minister, Imran Khan and his team for attaining this growth.

“A strong V growth despite being in a tough IMF program, which was necessitated by unsustainable current account deficit and falling foreign currency reserves, and a vicious Covid 19. Well done team Imran Khan; Thumbs up @FinMinistryPak @GovtofPakistan,” he tweeted.

Whereas the Chairman China Pakistan Economic Corridor (CPEC) Authority Lt. Gen. (retd) Asim Saleem Bajwa stated all the major macroeconomic indicators were moving towards a positive route due to massive hard work by the government.

“Not without an immense hard work, Pakistan’s economy performed beyond expectations with all major macroeconomic indicators showing positive trend amid Covid-19 pandemic,” he said in a tweet. 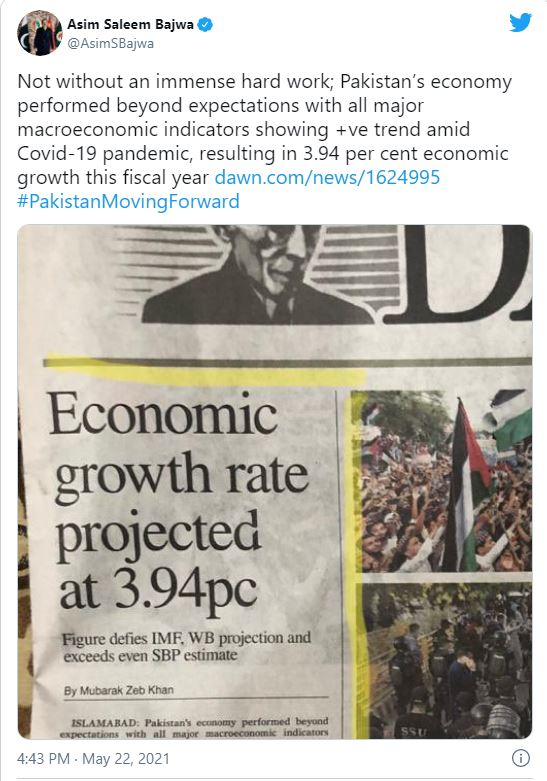 On the contrary, the National Accounts Committee (NAC) on Friday had estimated that the provisional growth rate of Gross Domestic Product (GDP) during the current fiscal year (2020-2021) was 3.94 percent.

Due to a combination of GDP growth and strengthening of the Pak rupee against the US dollar, the per capita income of Pakistan jumped by 13.4 percent during the current fiscal year (2020-21) from $1361 to $1543.

Whereas the GDP increase from $263 billion to $296 billion, an increase of $33 billion during the current fiscal year, was the highest ever in any year.

KARACHI: The equity market slid to close in the negative zone on...