Amidst the ongoing airstrikes by the Israeli Forces in Gaza, Several Pakistani celebrities have voiced support for innocent Palestinians being martyred and injured.

So far, at least 20 people have been martyred and 80 people left wounded as Israel launched military airstrikes in Gaza following intensified tensions between the law enforcement agencies in Jerusalem with Palestinian civilians.

However, netizens, human rights activists and many prominent personalities from across the globe have denounced the attack and demanded world leaders to take proper notice.

Similarly, showbiz celebrities from Pakistan have joined the bandwagon to express their outrage over Israel’s apartheid against the Palestinians.

Actress Neelam Muneer Khan penned a touching prayer for the Muslims for Palestine.

Acclaimed actress Saba Qamar took to her Instagram to express solidarity and condemned the brutal act of terrorism. 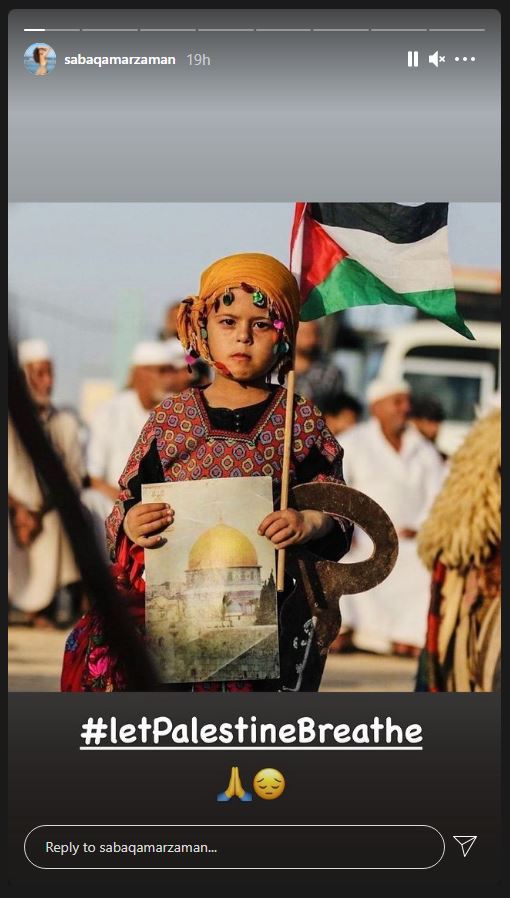 Singer Farhan Saeed lambasted at the silence of world leaders over the apparent “terrorism” continuing in Jerusalem.

The world's deafening silence is criminal! How can the international community sit back and watch this happen?

I am sickened & disgusted. How can you attack a place of a worship & attack defenceless worshippers? And yet again, the world will stay silent on Israel’s continuous oppression on Palestine. Ya Allah reham! #IsraeliAttackonAlAqsa #PalestiniansLivesMatter

On the other hand, Naimal Khawar Khan begged her followers to share and speak up about the cruelties happening in Palestine. 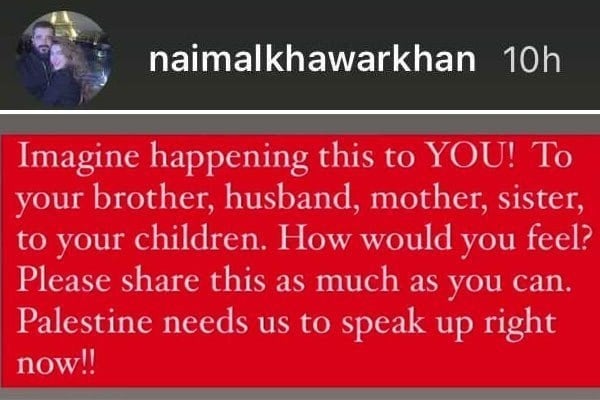 Note that the death toll has soared to 20 in ongoing Gaza airstrikes with 520 reported injuries, the Palestinian health ministry said on Tuesday.

According to the reports, the victims include nine children. The youngest victim was 10-years-old, Gaza health officials told.

The Israeli military said it struck several Hamas targets in response to continued rocket fire out of Gaza. It said eight sites were struck.

Hamas fired dozens of rockets into Israel, including a barrage that set off air raid sirens as far away as Jerusalem, after almost 300 Palestinians were hurt in violence at Al Aqsa mosque.

Seven members of one family, including three children, were killed in northern Gaza after an explosion whose origins were unknown.

Tensions in Jerusalem have been fuelled by the planned forced expulsions of Palestinian families from the Sheikh Jarrah neighbourhood and by an Israeli forces raid on Al Aqsa on one of the holiest nights of Ramadan.

The death toll has risen to 20 in recent Gaza airstrikes with...