Anushka Sharma Praises A Woman On Catching A Brilliant Catch

Pakistan’s dismal showing at Tokyo Olympics: Who to blame?

Anushka Sharma Praises A Woman On Catching A Brilliant Catch

Bollywood actress Anushka Sharma praised Lexy Whitmore’s brilliant catch. The actress shared her Instagram story and said for women that there is nothing that we women cannot do. 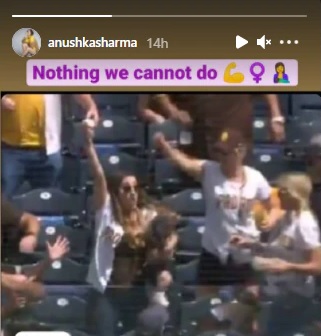 During a ‘Major League Baseball‘ match, a spectator identified as ‘Lexy Whitmore’ caught a brilliant catch with one hand and a three-month-old son in the other, a video of which has gone viral on social media.

In the match between the teams of San Diego Padres and Chicago Cubs, the player hit the ball which went to the top of the spectators’ stand.

The foul ball then bounced and came down, which Lexy jumped and grabbed with one hand.

Pakistan wins the toss and elects to field first