Amitabh Bachchan’s grandson Agastya Nanda has deleted all of his past photos and recently on Saturday, shared a new picture that seems apart from his previous ones.

In the most recent picture, Agastya Nanda is seen lounging on a cushion in a black jacket, blue pants and a white shirt. In his photo, he is seen looking at some faraway place, while sunshine light falls on his face. there was no caption to this photo.

Agastya’s followers showered him with compliments. Maheep Kapoor called him ‘handsome’ while Vikram Phadnis wrote, “Handsome howwwww are uuu.” A follower wrote, “Golden hour photoshoot with the gals.” Another comment read, “Smile so bright I have to wear sunglasses.”

Agastya is the son of novelist Shweta Bachchan Nanda and businessman Nikhil Nanda. Navya Naveli Nanda, his older sister, is his other sibling. In October of last year, Agastya made his Instagram account public. Even Suhana Khan and Alia Bhatt were perplexed by his postings.

On the other hand, Amitabh pointed out that Agastya and famous YouTuber Carry Minati look similar. 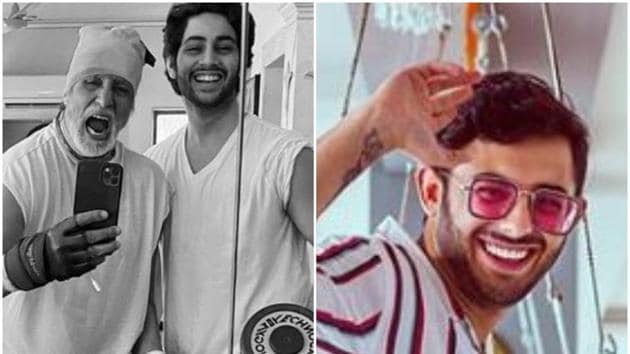 Amitabh was confused over it and recently shared it on Instagram, “Carry kia hota hai (What is Carry)?”

While doing gym at home, Amitabh shared a black and white picture on Instagram saying, “Fight .. fight the fit .. fit the fight .. reflective mirrors, laterally inverted imagery .. and the inspiration with Grandson ..”

The current USD to SAR currency exchange rate can be found here....

Today QAR to PKR exchange rate is RS 44.66 in the currency market today. This Qatari...