India’s prime minister held a vital meeting with politicians from occupied Kashmir for the first time since New Delhi exposed the region’s semi-autonomy and jailed many Kashmiri’s in the crackdown.

Whereas no major decision was announced after the meeting and many Kashmiri leaders said they recapped their demand that New Delhi should reverse its 2019 changes.

In a tweet, Prime Minister Narendra Modi termed the meeting an “important step in the ongoing efforts towards a developed and progressive” Kashmir.

“Our democracy’s biggest strength is the ability to sit across a table and exchange views. I told the leaders of J&K that it is the people, especially the youth who have to provide political leadership to J&K, and ensure their aspirations are duly fulfilled,” he said.

“Delimitation has to happen at a quick pace so that polls can happen and J&K gets an elected Government that gives strength to J&K’s development trajectory,” The Indian prime minister tweeted. 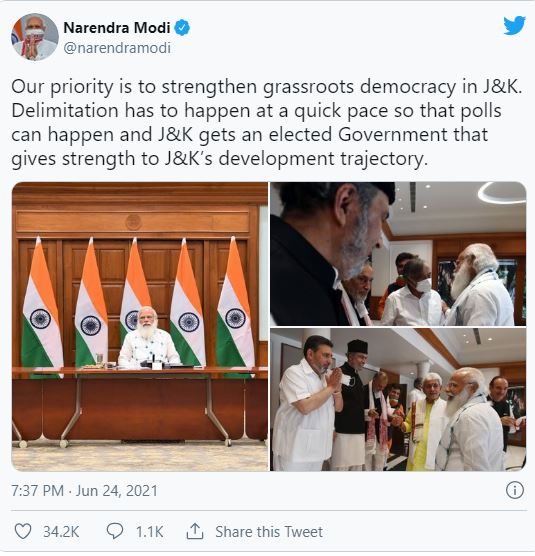 Narrative of the state will prevail in Pakistan: Firdous Awan

Popular showbiz actress Saba Qamar faces extreme criticism after some of her...

Pakistan’s emerging actress Minal Khan, who has won hearts with her stellar acting...

Bollywood diva Katrina Kaif is all set to give her best in...