Kuwait Allows Family and Business Visas for Pakistan after 10 Years

Kuwait has officially reestablished family and business visas for Pakistanis after a nearly decade-long pause, due to a productive meeting between the Minister of Interior, Sheikh Rashid Ahmad, and the Prime Minister of Kuwait, Sheikh Sabah Al-Khalid Al-Sabah, in Kuwait City.

The Pakistani Ambassador to Kuwait, Syed Sajjad Haider, was also present at the meeting.

After acknowledging the Kuwaiti Prime Minister for the symbolic restoration of Kuwait’s visa policy for Pakistan, Sheikh Rashid further stated that Pakistanis can now take advantage of the probable working/business opportunities in Kuwait. 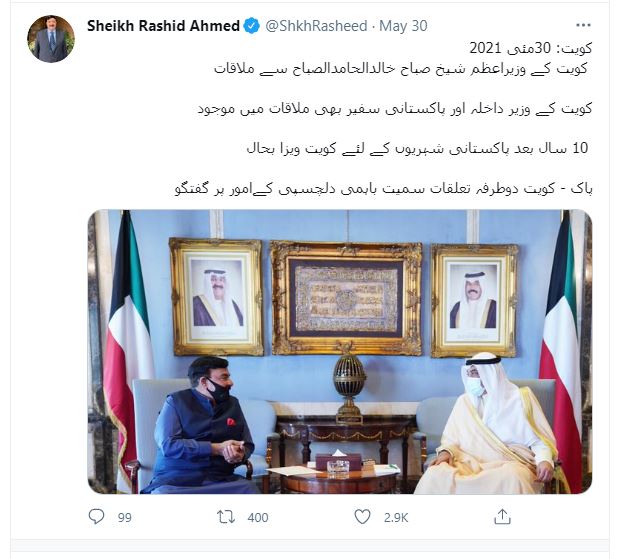 He also recognized the importance of launching trade between the countries and carried a special letter from Prime Minister Imran Khan to his Kuwaiti equivalent as an expression of generosity to maintain mutually pleasant relations in the predictable future.

The spokesperson for the Ministry of Foreign Affairs, Zahid Hafeez Chaudhri, discussed the restoration of Kuwaiti visas for Pakistanis with reporters, and stated,

“Pakistan and Kuwait have fraternal ties which are firmly rooted in shared faith and values. The bilateral relationship is marked by growing cooperation in diverse fields. In the same spirit, Kuwait has restored visas for family reunions and business visas for Pakistanis”.

In terms of business visas, Chaudhri explained that “Pakistani businessmen residing in other Gulf countries can now avail online visa facilitation for entry into Kuwait. At present, owing to the COVID-19 related travel restrictions, only Kuwaitis are allowed to enter Kuwait. However, there is an exemption for medical professionals”.

He later mentioned that the significant Pakistani and Kuwaiti authorities are working identically to chalk out a feasible channel for the “export of manpower in various fields from Pakistan”.

This is a piece of great news for those seeking to expand their horizon regarding work or business, Kuwaiti market will give Pakistani business a boost it needs badly.