Karachi: KMC Will Begin Demolition of Jubilee Market From Today

Bilawal, addressing a rally in Mirpur, said PPP stands side by side with Kashmiris, as they have always had the party’s back in its hard times.

The PPP chairman stated he could not endure to see the “helplessness” of the Kashmiri people and mourned over the insolence of the inescapable government towards them. 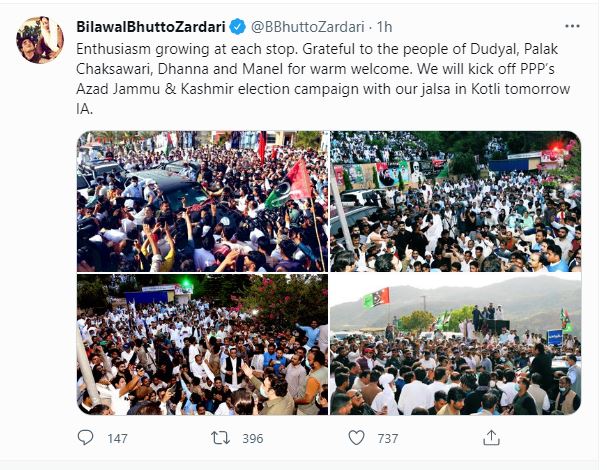 “You are suffering because of the failed and incompetent government of Imran Khan, “stated the PPP chairman.

Bilawal said PPP is the only solution for the problems whether they live in AJK or occupied Kashmir. “If you (people) help PPP form a government, then we will solve your problems and get rid of Modi and Imran Khan.”

“We have struggled against dictatorships together and history is a witness to that. You had supported President Zardari and Qamar Zaman Kaira was your minister for Kashmir affairs,” he said.

“You have to help elect PPP candidates with a huge margin. The PPP will serve the people of Kashmir after getting elected on 25 July.”

Later in the day, Bilawal said eagerness was growing at each stop, as he uttered his gratefulness to the people of Dudyal, Palak Chaksawari, Dhanna, and Manel for giving him a heartfelt welcome.

KARACHI: The Ministry of Finance has said that the transition towards higher...

ISLAMABAD: The federal government on Thursday set August 31 as the deadline...

The new UI can be seen in leaked marketing videos by SamMobile for...

ISLAMABAD: Pakistan is a lower-middle-income country with the fifth largest population in...