Leading and talented actress of the Pakistani showbiz industry Sonya Hussyn Bukharee has been declared as Bollywood actress Madhuri Dixit after being compared to Sri Devi earlier.

The actress recently shared her beautiful photos on her social media account on Instagram in which she is donned in a beautiful regal blue and pink bridal dress which added to the actress’ good looks.

Commenting on the actress’ photos, social media users labeled her as the most popular and successful Bollywood actress, Madhuri Dixit. 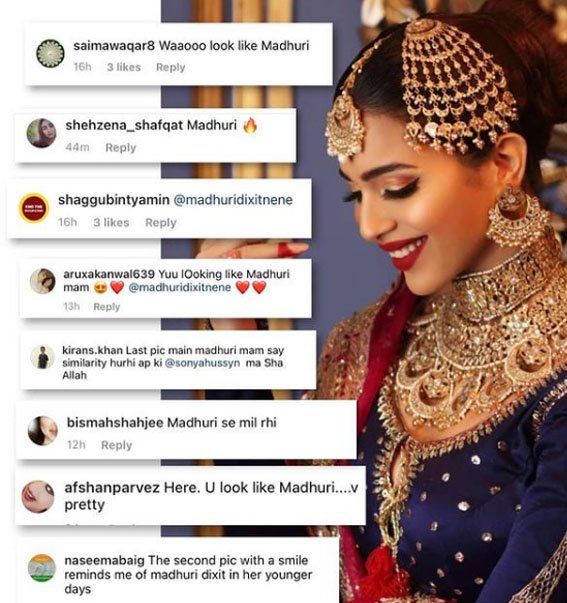 Several netizens commented on the actress’ photo saying she has a lot of resemblance to the legendary Bollywood diva Madhuri Dixit.

A user commented saying, “The second pic with a smile reminds me of madhuri dixit in her younger days”

Another user said, “She looks more like Priyanka Chopra than Madhuri”

Social media users continue to comment on Sonya Hussyn’s photos, while these photos of the actress are also being shared on various social media pages.

It should be noted that earlier Sonya Hussyn was compared to the late Bollywood actress Sri Devi by netizens.

Sonya Hussyn Slays In A Banjaran Avatar In Her Latest Photo

Sonya Hussyn was seen flaunting a Cholistani Banjaran avatar and no doubt...