Bilawal is going to take his CV to Washington: Shahbaz Gill

Bilawal is going to take his CV to Washington: Shahbaz Gill

Gill, while addressing a press conference in Karachi, claimed Bilawal is “going to take his CV (curriculum vitae) to Washington in a bid to get a job”.

“After reaching America, Bilawal will urge [the US government] to help him come into power, saying he is ready to do whatever they ask of him.”

Gill said that the PTI government “will never allow Bilawal to succeed in his plans and we will not let such a deal be struck.” 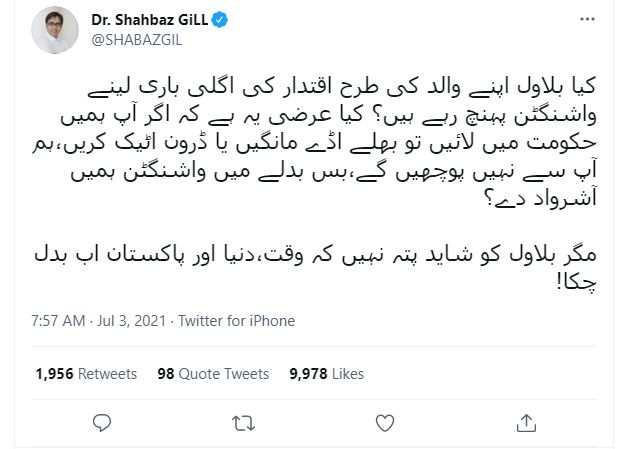 “These people (PPP) shift the blame on Musharraf for Pakistan having provided military bases to America”.

“[Whereas] it is you (PPP) who put your interests above national interests,” Gill said.

Gill made this statement, two days after COAS General Qamar Javed Bajwa stated that Pakistan would not give airbases to the US if the government has decided against it.

“You should have put this question to the government. Why have you asked this from me?” Stated Gen Bajwa when first questioned on the military’s position on the matter.

Whereas, Pakistan has openly declined to give military bases to the US for maneuvers inside Afghanistan after the extraction of foreign forces from the war-ravaged country.

On the Contrary, Washington had requested help from Islamabad to keep a check on the situation in Afghanistan and halt it from falling into the hands of terrorists.

Furthermore, three days ago Prime Minister Imran Khan, in his address on the floor of the National Assembly, had said Pakistan could be a partner in peace with the US but not in battle.

LAHORE: The treasury and the opposition members of the Punjab Assembly (PA)...

ISLAMABAD– Pictures of an obscene photo shoot in front of a portrait...

ISLAMABAD: The Federal Cabinet on Tuesday approved an increase of Rs800/maund in...