Actress Sonya Hussyn has been criticized by fans for dressing up on the occasion of Eid-ul-Adha.

The actress shared a few photos of Eid on her Instagram in which she posed for Eid-ul-Adha.

In the pictures, the actress can be seen in a cheerful mood wearing white and blue men’s style kurta shalwar and tied her hair in two braids.

However, the actress is facing significant criticism after the photos went viral. 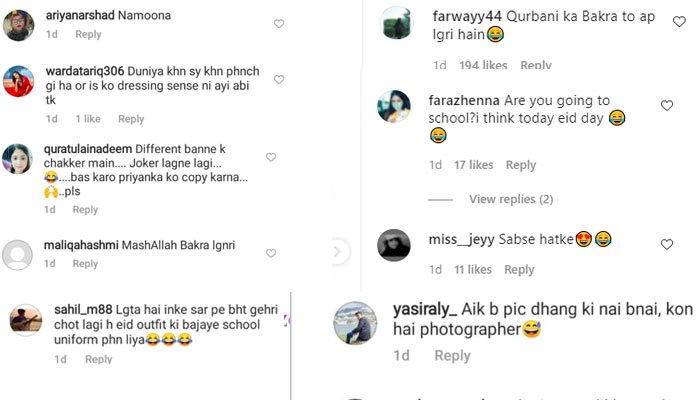 One user wrote that you took Eid-ul-Adha too seriously.

Another user wrote that she has not got any dressing sense till now.

A user also looked very angry at the actress dressing and expressed his anger and wrote that stop copying Priyanka.

One user asked if you are going to school, I think today is Eid.

Another said that it looks like she had a serious head injury. Instead of wearing Eid clothes, she wore a school uniform.

Bella Hadid, a model, has retaliated against trolls who have speculated that...

Kim Kardashian and Kanye West, who were calling it quit with assets...

KARACHI: The rupee made a recovery of 94 paisas against the dollar...

The Pakistan Cricket Board (PCB) has unveiled the new kit for the...

New Zealand wicketkeeper-batsman Tom Blundell has been ruled out of the ODI...