Federal Minister of Education and Professional Training Shafqat Mehmood condemned the PML-N and said that the party is “playing politics with students to gain cheap popularity.”

Taking to Twitter, the minister disparaged PML-N leaders Ahsan Iqbal and Saad Rafique and said that they know that exams have already taken place in Balochistan and Sindh, therefore, other students cannot be treated differently. 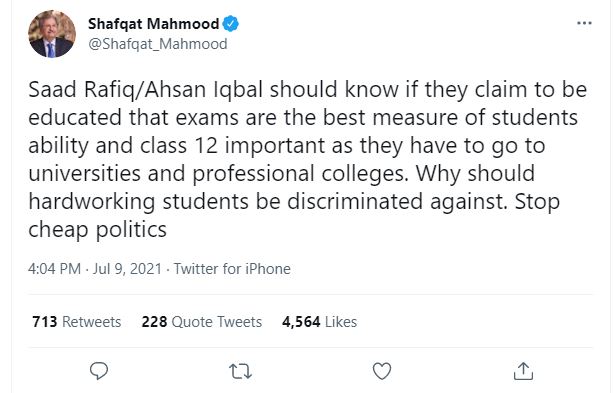 “They know that [the] decision to take exams was taken unanimously by all federating units, including PML-N’s govt in AJK, and PPP in Sindh,” he wrote.

“They know that students cannot be promoted on the basis of previous exams as there were no exams last year.”

Shafqat stated that if Saad Rafique and Ahsan Iqbal claim to be educated then they should know that exams are the best measure of students’ capability.

He said that it is vital for students of class 12 to take the exams as they have to go to universities and professional colleges. 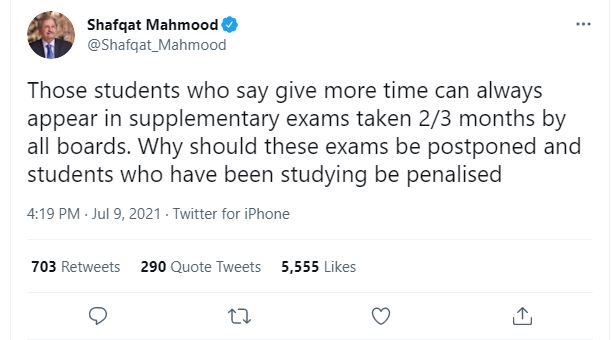 “Why should hardworking students be discriminated against. Stop cheap politics,” the minister stated.

“Yet they [Ahsan Iqbal and Saad Rafique] were pretending that one order from a federal minister can stop exams across the country. Again just a failed attempt at cheap politics,” the minister wrote while condemning the statements of the PML-N leaders.

Mehmood reminded students that exams would be beginning from tomorrow (July 10) in the provinces and merging units.

“Wish all students taking exams from tomorrow the very best. Inshallah, all will do well,” he wrote.

“Those students who say give more time can always appear in supplementary exams taken 2/3 months by all boards. Why should these exams be postponed and students who have been studying be penalised?”

Whereas, Ahsan Iqbal, addressed a session of the National Assembly, said that “hundreds of students are depressed and are forced to commit suicide because of the pressure of exams.”

“Tens of students are looking towards the Assembly to take an appropriate decision. Those belonging to the lower-middle class and studying in government schools could not get sufficient time to cover the syllabus. He demanded a 45-day delay in Intermediate examinations so that the students could get proper time to prepare themselves.

On the contrary, Rafique stated “politics should not be involved in the sensitive issue of Intermediate examinations,” He necessitated six to eight weeks adjournment in the conduct of examinations.

Bollywood actress Shraddha Kapoor's WhatsApp chat has been leaked. According to Indian...