SHOCKING REVELATIONS : How Noor Mukadam Was Slaughtered by Zahir Jaffer

SHOCKING REVELATIONS : How Noor Mukadam Was Slaughtered by Zahir Jaffer

Noor Mukadam was the daughter of Pakistan’s Ambassador to South Korea Shaukat Mukadam has been brutally murdered by businessman Zahir Jaffar in the F7 Sector of Islamabad according to initial reports. Noor Mukadam left home & was with accused Zahir Jaffar & reportedly both were friend since long.Jaffar slit the throat of victim and murdered her.

Alleged Killer of former Ambassador’s daughter arrested. Police have arrested a businessman for allegedly killing the daughter of former Pakistan’s ambassador to South Korea Shaukat Mukadam in the F-7/4 sector of the federal capital.

In a tweet, the capital police said that investigation into the matter has been initiated, adding that the suspect has been arrested.

Police said the girl was also stabbed and beheaded with a sharp instrument after firing, while another person was injured in the incident.

A friend of the girl has been arrested for her alleged involvement in the incident, they said. The Police said the alleged killer was the son of the CEO of a leading construction company in Islamabad.

According to the sources, former Pakistani diplomat’s daughter Noor was killed over a break with the accused. The accused could not handle the refusal and killed the girl.

Police obtained a three-day remand of the suspect from a local court, while officials said they were investigating the suspect’s motive for allegedly killing the woman.

Shaukat Mukadam stated in his complaint that he had gone to Rawalpindi on July 19 to purchase a goat for Eidul Azha, while his wife had gone out to pick up clothes from tailor. When he returned home in the evening, he found his daughter Noor missing from their house in Islamabad.

They found Noor’s cellphone to be switched off, and started a search for her. Later, Noor called her parents to inform them that she was travelling to Lahore with some friends and would return in a day or two, according to the FIR 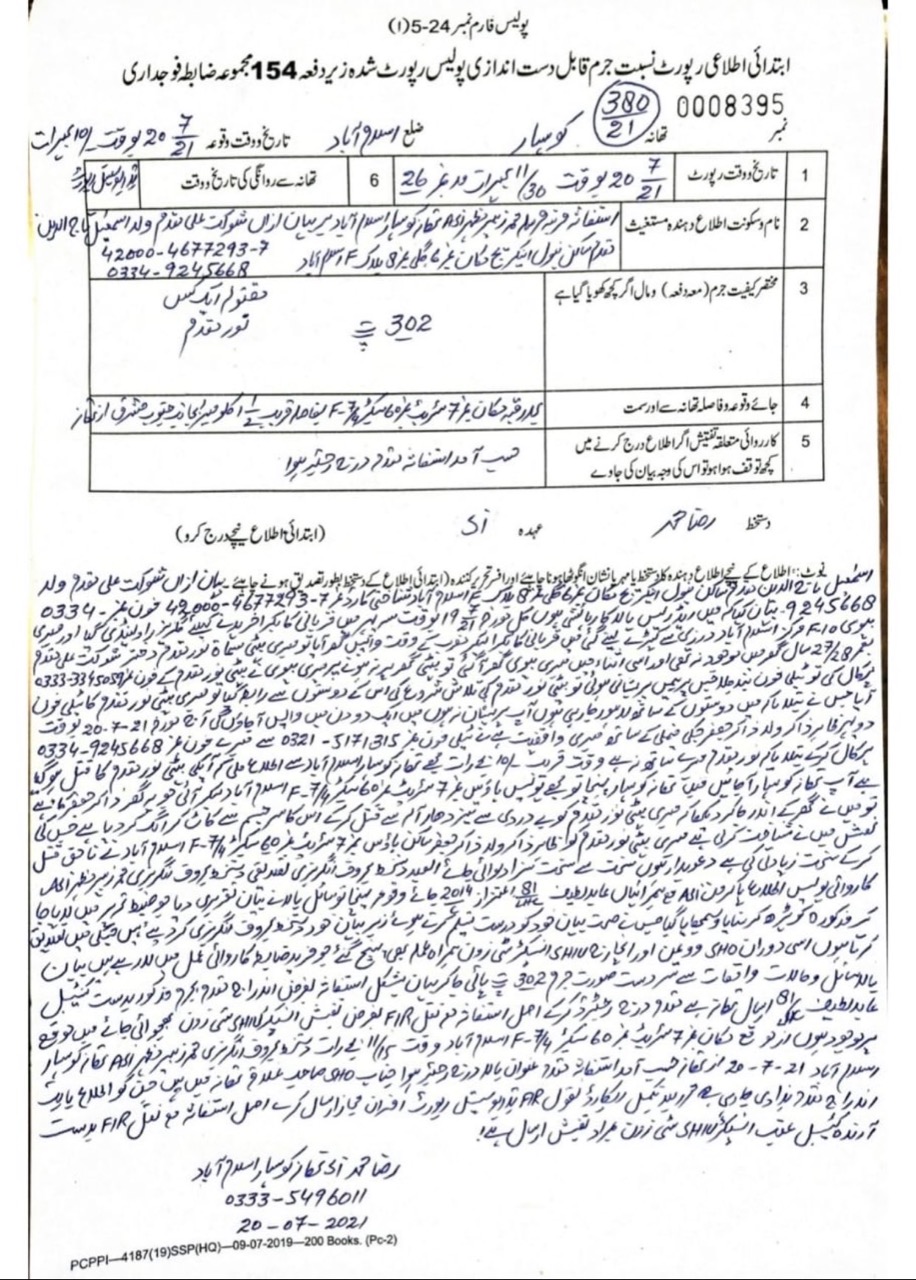 On Tuesday afternoon, the complainant said he received a call from Zahir, son of Zakir Jaffer. Zahir informed Mukadam that Noor was not with him, the FIR said.

At around 10:00 o clock in the night, Shaukat Mukaddam the victim’s father received a call from Kohsar police station, informing him that Noor had been murdered.

Police subsequently took complainant to Zahir’s house in Sector F-7/4 where he discovered that his “daughter has been brutally murdered with a sharp-edged weapon and beheaded”, according to the FIR.

Mukadam, who identified his daughter’s body, sought the maximum punishment under the law against Zahir for allegedly murder

“When we arrested him, he was sound and in his senses. He may have had a past history [of taking drugs] but at least at this time he was completely in his senses.” SSP (Investigation) Ataur Rehman  said

He emphasised that police were focusing on the suspect’s “mental frame of mind” and that initial findings indicated the suspect was completely aware of his actions when he allegedly committed the murder.

Price of milk in Karachi yet to be fixed, SHC told

KARACHI: The Sindh High court was informed on Thursday that “fair and...

KARACHI: The Sindh High Court on Thursday directed the provincial government to...

CRBC lift-cum-gravity project to be a real game-changer: PM

ISLAMABAD: Prime Minister Imran Khan on Thursday said that the construction of...

KARACHI: Rehana Peter has been working at the Covid-19 ward of a...

KARACHI: It is a commonly held view in Pakistan that registering a...