A large “dead zone” in the Gulf of Mexico, an area of low to no oxygen

A large “dead zone” in the Gulf of Mexico, an area of low to no oxygen

NOAA-supported scientists recently announced that this year’s Gulf of Mexico “dead zone” — an area of low to no oxygen that can kill fish and marine life — is approximately 6,334 square miles or more than four million acres of habitat that could be unavailable to fish and bottom species.

Over the last five years, the average hypoxic zone has been 5,380 square miles, which is 2.8 times larger than the Hypoxia Task Force’s 2035 target. In 2017, the largest hypoxic zone measured since records began in 1985 was 8,776 square miles. 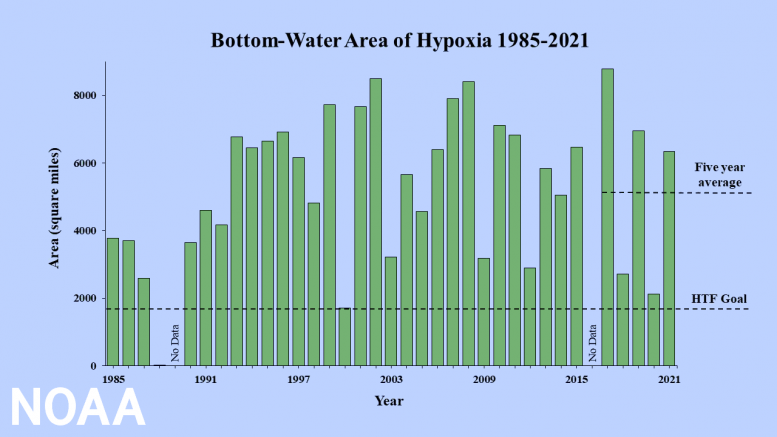 The annual dead zone survey was led by scientists from Louisiana State University and the Louisiana Universities Marine Consortium during a research cruise aboard the R/V Pelican from July 25 to August 1.

Nancy Rabalais, Ph.D., a professor at Louisiana State University, and LUMCON who is the principal investigator said, “The distribution of the low dissolved oxygen was unusual this summer.”

The majority of the study area had low salinity surface waters, indicating that high freshwater runoff from the Mississippi River watershed affected the area. For the three weeks preceding the research cruise, river discharge was higher than usual.

Rabalais, Cassandra Glaspie, Ph.D., of LSU, and Gina Woods, LUMCON research associate, shared the role of chief scientist. The full complement of scientists was on board for the 2021 shelf-wide cruise, which was cut short in 2020 due to COVID restrictions.

BTS Jimin got a heartfelt note from a fan, warms the hearts of netizens

BTS also known as the Bangtan Boys, is a seven-member South Korean...

Morning show host Nida Yasir recently came to the light due to...

The bridal photoshoot of famous and gorgeous actress of Pakistan showbiz industry...