Afghan Crisis: What you need to know about Kabul airport blast

Afghan Crisis: What you need to know about Kabul airport blast

Alleged suicide bombers collided with the swarming gates of Kabul airport with at least two explosions on Thursday, causing a massacre among distressed civilians trying to flee.

The attack has cast the final days of the Western airlift of its associates into chaos.

The blasts took place outside airport

The first explosion happened around 18:00 local time (13:30 GMT) outside the airport’s perimeter, close to the Baron Hotel. Shooting occurred, followed by a second explosion near the Abbey Gate, one of the airport’s main gates.

Before carrying out the attack, a suicide bomber walked right into the middle of people waiting at the entrance, according to UK Defence Secretary Ben Wallace.

“We think it was a suicide vest and a smaller device. The individual got to the perimeter we had pushed out the day before in response to that threat.”

According to reports, some of the victims were blown into a sewage canal where Afghans were awaiting to be evacuated. The large numbers of victim carried to Kabul’s Emergency Hospital.

The area around the Abbey Gate had recently been surrounded by US and British troops. One attacker, according to one account, fired into a crowd of people, although reports also said Taliban guards had fired into the air.

Before the incident, US citizens who had gone to the area around the airport had been told to “leave immediately.”

“It was about 300 metres, we think, from the Baron’s hotel, and [the bomber] walked straight into the middle of those families waiting.” 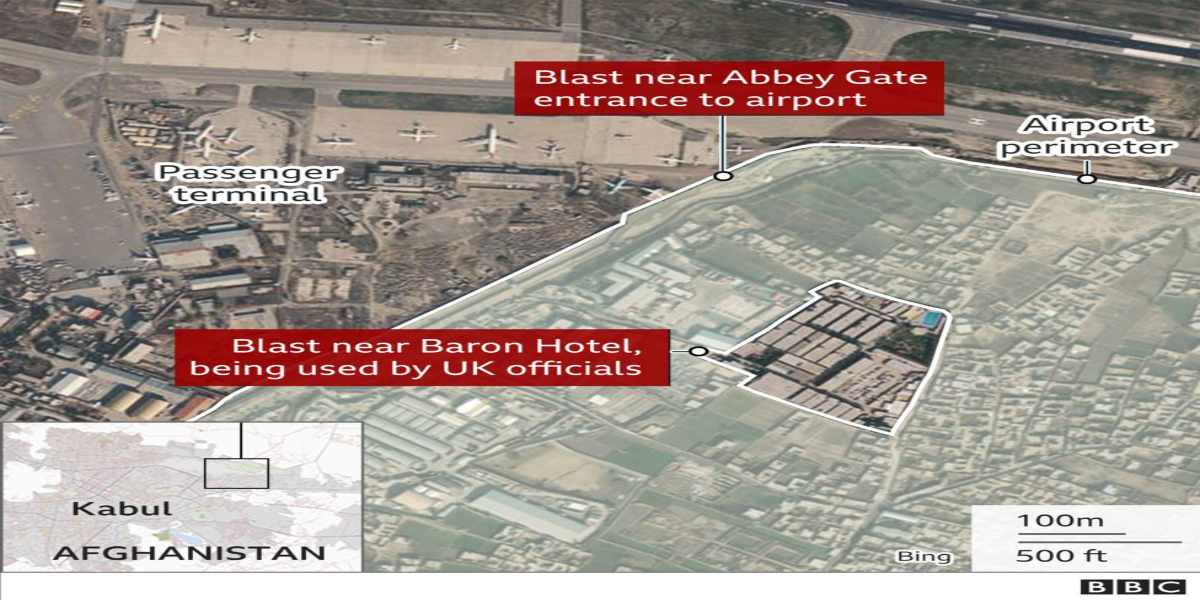 It is estimated that 90 people were killed and 150 got injured.

According to the Pentagon, 13 US militants were killed. There were US marines and a US Navy medic among them. A total of 15 troops were affected.

The injured were carted away in wheelbarrows, according to photos captured at the scene.

Thousands of people had gathered in the area, hoping to be admitted onto an evacuation flight.

Some countries had already ended their evacuation flights

The blast is likely to make it much more difficult to evacuate thousands of people from Afghanistan.

A number of countries Germany, the Netherlands, and Canada, had stated that they would no longer be willing to initiate flights before the blast.

Turkey announced the withdrawal of its troops who had been providing security at the airport for the past six years.

The United Kingdom has also declared that it will no longer calling people to the airport for evacuation.

Afghan Crisis: What you need to know about IS-K

Germany votes Sunday in the first election not to feature Angela Merkel...