Waqar Zaka is partnering and investing at NED University

PTV suffers a loss of Rs 250 million due to the cancellation of New Zealand and England series, Fawad Ch

LAHORE: With the beginning of Muharram, marking the start of the Islamic lunar year, Chiniot experiences a complete change in its mood.

Though only 28 per cent Shiites constitute the total population of the district, quantitative figures fail to do justice to the reverence that presides in the area.

The district includes the oldest and culturally most important tazias in the entire Subcontinent that are erected in the centre of the city on Youm-e-Ashura, the 10th day of the lunar month.

Chiniot’s scenic alleys and intertwined streets have always caught the eye of skillful and talented artisans, which included the Pirjah family, who in the 17th Century, built a mosque for a confidante of Shah Jehan.

A descendant of the family, Akhtar Pirjah — a smart man characterised by a hawkish nose and sleek fingers proficient in woodcraft — now runs a workshop in the same city. His craft is famous and spread across the world.

It was his great grandfather, Ilahi Bux Pirjah, who first initiated making the replicas that are now seen in the month of Muharram.

Though Timur from the Timurid Empire was the first one to build a tazia when he arrived in India, it was during the Mughal era that the art truly flourished.

A multi-storied and expensive structure created in 1934 was the commencement of the first tazia, which now rests in Shadi Malang Imambargah and has a dome and a crescent at the top.

Ilahi Bux interestingly travelled across many districts of Jaisalmer, Jodhpur, Bikaner and Jaipur on the orders of a king who wanted the artisan to travel across India to gauge conventional artwork of woodwork and carvings.

Although the untimely death of the king stalled the project, the craftsman utilised his observations when he was given the task to design Gulzar Mahal – a Chinioti icon by Sheikh Umar Hayat.

Inspired by the multi-storied palaces and facades, imposing staircases, jharoka-laden walls and the fusion of Eastern temple-like structures, Ilahi Bux decided to design the tazia. Interestingly, all tazias used in many parts of Pakistan are manufactured in its home city of Chiniot. 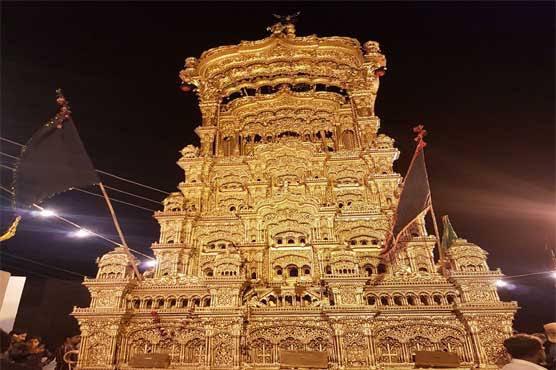 The tazia is carried out in parts on different days during the first 10 days of Muharram due to its intricacy in history.

The takht (base of tazia) is the first piece to be carried out on day one; followed by the palanquin and finally, the jhoola. The reconstruction of the tazia is then done on the 10th day. When completely assembled, the tazia reaches up to 42-feet and weighs one-and-a-half tonne. Sixteen men are deployed to lift the huge artifact.

Although the art of making tazias has become a commercial profession, a great deal of history remains embedded therein.

It can be said that the family of Ilahi Bux created many masterpieces through its lineage of artisans. Their talent did not stop at creating the heritage of tazias, as he was also later commissioned to decorating a portion of the Buckingham Palace.

On the other hand, his grandson was trusted with the construction of the wooden interior of the royal family mansions in Qatar. Akhtar continues to showcase his talent with the satisfaction that he has done justice to preserving the legacy of his family.

The University of Karachi (KU) has adjourned the examinations that were planned...

Intermediate results 2021 to be announced by tomorrow, FBISE

The Federal Board of Intermediate and Secondary Education (FBISE) to declare the...