Concacaf to probe homophobic shouting in Cruz Azul vs. Monterrey

Hosts won the toss and skipper Joe Root elected to bowl first in the second test between England and India in the ICC World Test Championship (WTC) 2021-23.

Sharma played well alongside KL Rahul before he got bowled at 83. The opening pair scored a partnership of 126 – the first by an overseas opening pair in a Test in England since 2006.

However, Anderson bumped up his England record tally of 622 wickets after dismissing Sharma and Cheteshwar Pujara.

Anderson performed well, who had been doubtful of thigh pain.

Rahul, who scored 84 in the first test before rain interrupted the play, was on 55 not out before tea, alongside Indian skipper Virat Kohli.

It took a high-class delivery to remove Sharma, who could be proud of a 145-ball innings that included 11 fours and a six despite missing out on an eighth Test century.

There were rumors that Anderson might sit back due to his thigh pain, where England attacker Stuart Broad is out for the rest of the series due to his calf injury.

After winning the toss and facing overcast skies on a green-tinged surface that promised to aid his quick bowlers, England captain Joe Root — the only home batsman to pass fifty in the series opener with scores of 64 and 109 — elected to field first.

However, India was 46-0 after the morning session when rain interrupted the play after 18.4 overs.

By the end of the day, Rahul stood at 127 alongside Ajinkya Rahane who scored just 1 run. 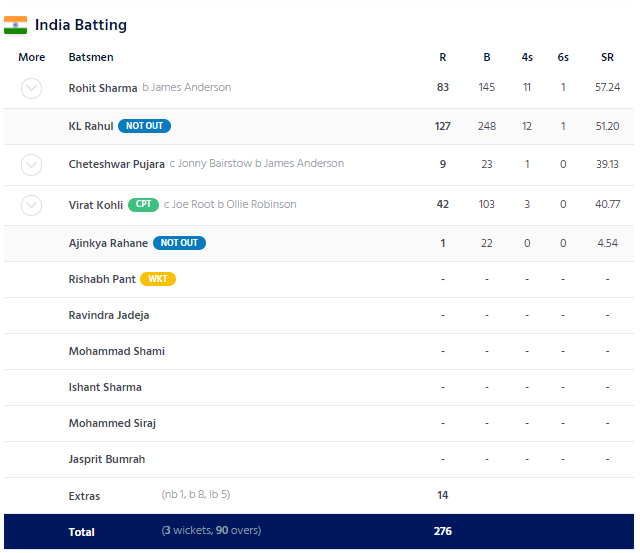 England vs India: Both Teams Dock WTC Points for Slow Over Rate

England and India have been penalized two points each from their 2021-23...