Movie Review: The Conjuring: The Devil Made Me Do It

Movie Review: The Conjuring: The Devil Made Me Do It

One could argue that the newest edition to the Conjuring Universe – The Devil Made Me Do It – was only sparsely scary at best. It seems as if the third part of the horror series is pulling away from their usual genre by delivering a sort of investigative thriller.

Written by James Wan and David Leslie and directed by Michael Chaves, The Conjuring: The Devil Made Me Do It is highly inspired by David Fincher’s Seven with quirky elements such as a creaky old basement, a creepy old man who knows his way around it, and yet the people, who had the chance of meeting him only once, follow him down the whole way. Yes, this adaptation has grown quite old. And yet, after a series of spin-offs such as Annabelle and The Nun, the third installment of the franchise doesn’t match the excitement and pure terror its predecessor once offered. The movie sometimes lost its plot and went in a totally different direction which was an unnecessary distraction from Arne’s case. It seemed like a forceful addition to the story just to make it scarier. 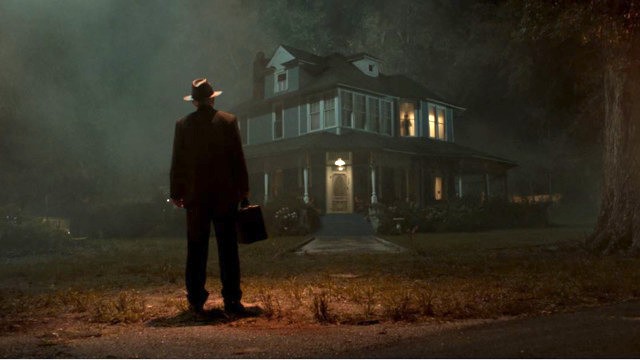 The story takes place in 1981 and revolves around a failed exorcism of David, leaving Arne Johnson, a lively young boy in a relationship with David’s sister Debbie, cursed with an evil spirit. It is only the murder of their tenant and the aftermath of the events that spark the interest of the Warrens in this case, who later embarked on a quest to prove Arne’s innocence to the court and also free him from the devil.

There is no doubt that Wilson and Farmiga are some of the most iconic couples of the contemporary horror film genre. It is only due to their quirky bits and old-fashioned elegance that we endure the not so horrifying jump scares and a not so frightful horror movie. Although there are some brilliantly done cinematography and some justified nostalgic references, it still fades away in comparison to its predecessors and truly doesn’t belong in the legendary Conjuring franchise.