Former skipper of Pakistan cricket team, Sarfaraz Ahmed, got angry on a female sports journalist, Aalia Rasheed, when she made fun of him and taunted him.

Sarfaraz’s wife Khushbakht Sarfaraz, shared a video of her husband using her Twitter account, in which he was cooking food.

Perks of him being around 🙂 pic.twitter.com/txk0QknOJ8

Right-arm medium-fast bowler, Hassan Ali commented on the post that the skipper doesn’t teach him the talent of cooking food.

On which Right-arm leg break spinner, Shadab Khan commented that they want a tea from the skipper.

On this Aalia Rasheed jumped into the conversation and taunted Sarfaraz by saying that in past when his fans watched him serving water to the players on the field, they got angry and bashed PCB on the internet, and warned Hassan and Shadab for their demand.

Sarfaraz Ahmed loses his temper on her tweet and replied that this is not the cricket field and she should better concentrate on her job rather than giving useless suggestions to them, and keep her advice within herself. 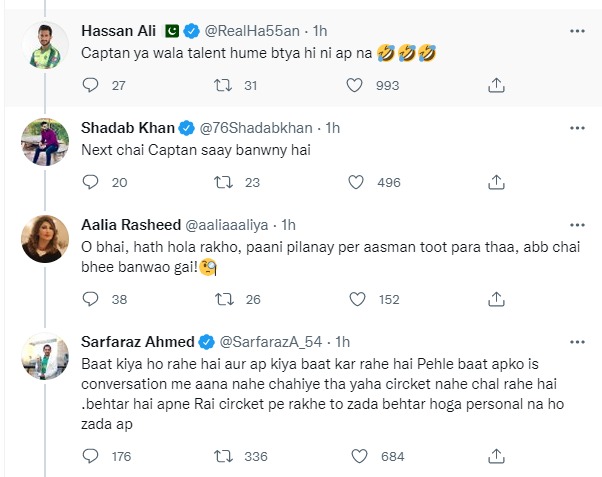 British High Commissioner to Pakistan Christian Turner has rejected speculation that the...

Pak v NZ: Few days back, an article was published on ‘Sunday Guardian...