Babar Azam went for facial therapy before the T20 match

Babar Azam went for facial therapy before the T20 match

Babar Azam was born on 15 October 1994. He is a Pakistani cricketer who has captained the country in all formats. Azam, a right-handed top-order batsman, is largely regarded as one of the best batsmen of his generation.

He is the captain of Central Punjab in domestic cricket and plays for Karachi Kings in the Pakistan Super League. In April 2021, he was ranked first among ODI batsmen by the International Cricket Council (ICC).

Babar started his career in May 2015, Azam was included in the Pakistani ODI squad for the home series against Zimbabwe. On May 31, he made his One-Day International debut, scoring 54 runs off 60 balls in the third ODI.  His outstanding debut won him a spot in both the Test and ODI squads for the upcoming series against Sri Lanka.

He was not chosen to participate in the Test series. Azam only scored 37 runs in the two ODI matches he played during the series.

Recently Babar went for facial treatment for skincare purposes as it’s not easy to play in a dusty environment and run all over the pitch for fielding. 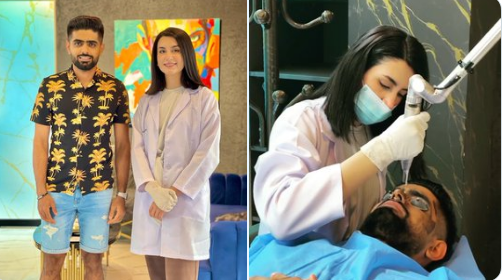 Janhvi Kapoor rise and shine with her pilates session