Pakistan Cricket Board (PCB) has announced the 15-man squad for the upcoming series against New Zealand and England and ICC Men’s T20 World Cup 2021. 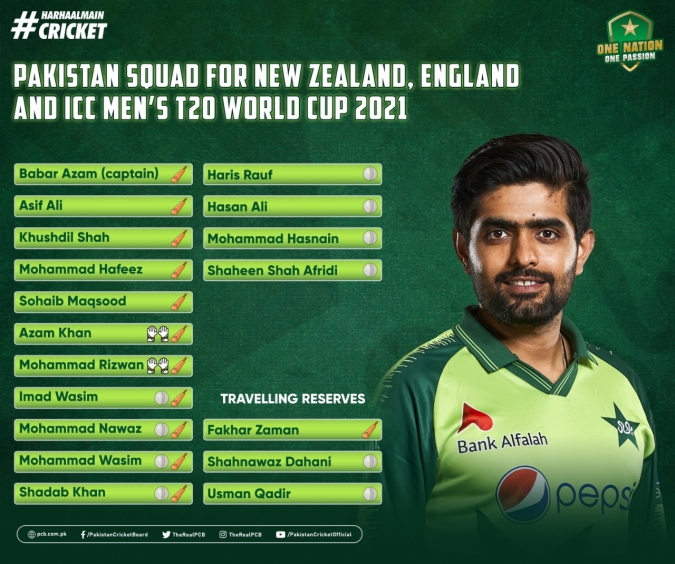 Pakistan will go against New Zealand and England in the home series in Rawalpindi and Lahore from September 27 to October 14, after that the national squad will take on their arch-rivals India in their opening match of the ICC T20 World Cup on October 24 at Dunai International Stadium.

Asif Ali and Khusdil Shah have been added to the squad to give more batting power to the middle-order.

While selecting Asif and Khusdil for the squad, chief selector Muhammad Wasim said, “Asif Ali and Khushdil Shah may not have impressive numbers against their names but hardly anyone can doubt their tremendous talent and prowess. They are the best in the available pool of middle-order batsmen and we remain confident that they will provide us solutions to our middle-order difficulties through solid performances.

“These two experienced middle-order batters will compliment Babar Azam, Mohammad Hafeez, Mohammad Rizwan and Shoaib Maqsood, while in Imad Wasim, Mohammad Nawaz and Shadab Khan, we have three top-quality spinners who are equally good with the bat and outstanding in the field.”

Arshad Iqbal, Faheem Ashraf, Fakhar Zaman, Sarfaraz Ahmed, Sharjeel Khan, and Usman Qadir have been left out, while Fakhar and Usman, together with Shahnawaz Dahani, have been designated as the three traveling reserves.

Wasim said, “Fakhar Zaman, Shahnawaz Dahani and Usman Qadir were unlucky to miss out on the selections. Sohaib Maqsood’s ability to bat and perform anywhere in the top-order has given him an edge over Fakhar, while the presence of three experienced spinners, who are also capable batters, and five genuine wicket-taking fast bowlers made it difficult for Usman Qadir to get into the side. Like Faheem, an uncapped Shahnawaz was tied with Mohammad Wasim Junior, but we opted for the latter due to his pace and batting abilities.”

Wasim Khand said that most of the players in the 15-man squad are those who have ample experience on the UAE pitches after they lifted up Pakistan’s position in the ICC T20I teams ranking with 21 wins out of 36 matches played.

While further added he said that the series against New Zealand and England at home will be the one last opportunity for the team to polish its skills before heading for the UAE tournament.

He also said that due to outstanding performances on the UAE pitches and years of experience, the national squad is confident of outperforming the teams. He further said that the national team needs to remain calm and have faith in each other’s and their own abilities.

Pakistan vs New Zealand: Over 220 rooms booked for players and their families

Preparations for the New Zealand tour to Pakistan are underway as three...

England women captain, Heather Knight said that the decision to call off...

Ramiz Raja: ‘Australians have changed their DNA because of IPL money’