What is the health condition of Umer Sharif now?

What is the health condition of Umer Sharif now?

Pakistani comedian Umer Sharif has been unwell for some time now, according to his son, Umer is suffering from a heart condition and is undergoing treatment.

He also said Umer Sharif’s health is still critical and shows no indications of improvement, according to doctors his father’s heart illness is increasing day by day.

He further said if he is not sent to the United States for treatment he will have to undergo open-heart surgery.

Adding that his father did not recognize anyone after regaining consciousness for a few minutes. He pleaded with the public to pray for his father’s recovery. Earlier, a video went viral on social media in which the comedian asked for help from Prime Minister Imran Khan for his treatment.

Political personalities are continuing to visit Umer Sharif, with the most recent visit made by former Karachi mayor Farooq Sattar. One of the Twitter users shared a picture of the visit. 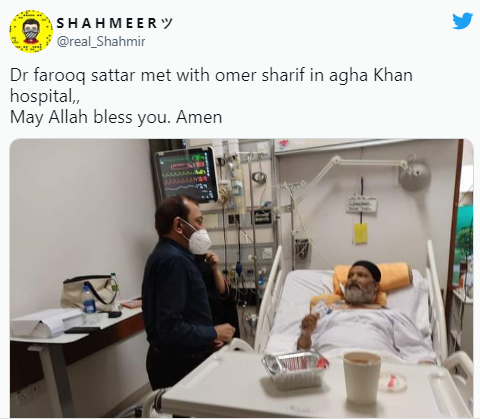 Umer Sharif to get support from Sindh government on his treatment

Umer Sharif is a cancer patient. In a special video message, the...