Ambassador of Jordan starts the Jordanian pavilion at Expo 2020

Cracks have opened to the east of the big island within the Halemaumau crater lava lake that was active from December 2020 to May 2021, and they are creating lava flows on the surface of the older lava lake. 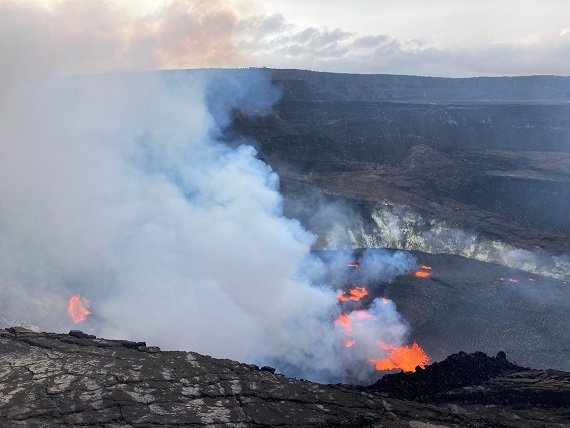 Another vent opened on the west wall of Halemaumau crater about 4:43 p.m. HST.

Shortly after upgrading the volcano’s warning level to a watch from an advisory, the Hawaiian Volcano Observatory tweeted a photo of lava in the crater at 3:40 p.m.

Significant ground deformation and seismic activity occurred this afternoon. At about 4:00 p.m., the level of alert was upgraded from orange to red (warning).

The US Geological Survey (USGS) has reported 17 earthquakes with magnitudes ranging from 2.5 to 2.9 in the previous 24 hours, according to the Hawaiian Volcano Observatory.

There are presently no risks to regions where people reside since the eruption is entirely confined within the Halemaumau crater. As the eruption proceeds, officials will keep an eye on the activity and possible dangers.

Shira from Hawaii published the following on Twitter when my son went to pick up [his] son from Volcano Charter School this afternoon, he noted an increase in sulfur dioxide smell.

Kilauea last erupted in December 2020, when it first started. Until May 2021, it continued to spew lava. At the peak of the crater, a fresh lava lake resulted from the eruption.

During the 157 days it was continuously erupting, Kilauea generated approximately 41 million cubic meters of lava or 11 million gallons.

When Kilauea erupted in one of its lower rift zones in 2018, lava poured from the same location. That was the largest explosion the volcano has ever seen. It damaged tens of thousands of homes and forced thousands of people to flee their homes.

Hawaii reports the growth of hotel income for August 2021

Hawaii is announcing generous development in hotel income for August 2021. The...

JAKARTA - The Indonesian resort island of Bali is waiting in excitement...

25-hours Hotel One Central to open in Dubai soon

The 25hours Hotel One Central in Dubai has announced that it will...

Nirvana Travel continues to expand across the Middle East

Emirates Motor Company has given Nirvana Travel & Tourism a fleet of...

Air Belgium has started a fleet renewal programme with Airbus

Expo 2020 has gotten off to a fast start in Dubai

As demand grows across the Norwegian network, traffic data for September show...

KARACHI: The average customer rates of buying and selling of Pound Sterling...