Uncertain future for the booksellers of Kabul

China to step up protection, utilization of grotto temples

Uncertain future for the booksellers of Kabul

KABUL: The problem with this publication, a bookseller in the Afghan capital Kabul explains, is not so much that it’s by Michelle Obama, but that she’s not wearing a hijab in the cover photo.

The former US first lady’s memoir “Becoming” goes back on the stack, ready for a curious reader.

The Taliban movement seized the city in August and have declared Afghanistan an Islamic Emirate. They have not yet ordered bookshops shut nor imposed censorship, but a climate of tension prevails and an economic crisis has hit takings.

Near the university, Kabul’s book market was once a fashionable haven for the young intellectual crowd, but now around half the stores and stalls are closed. 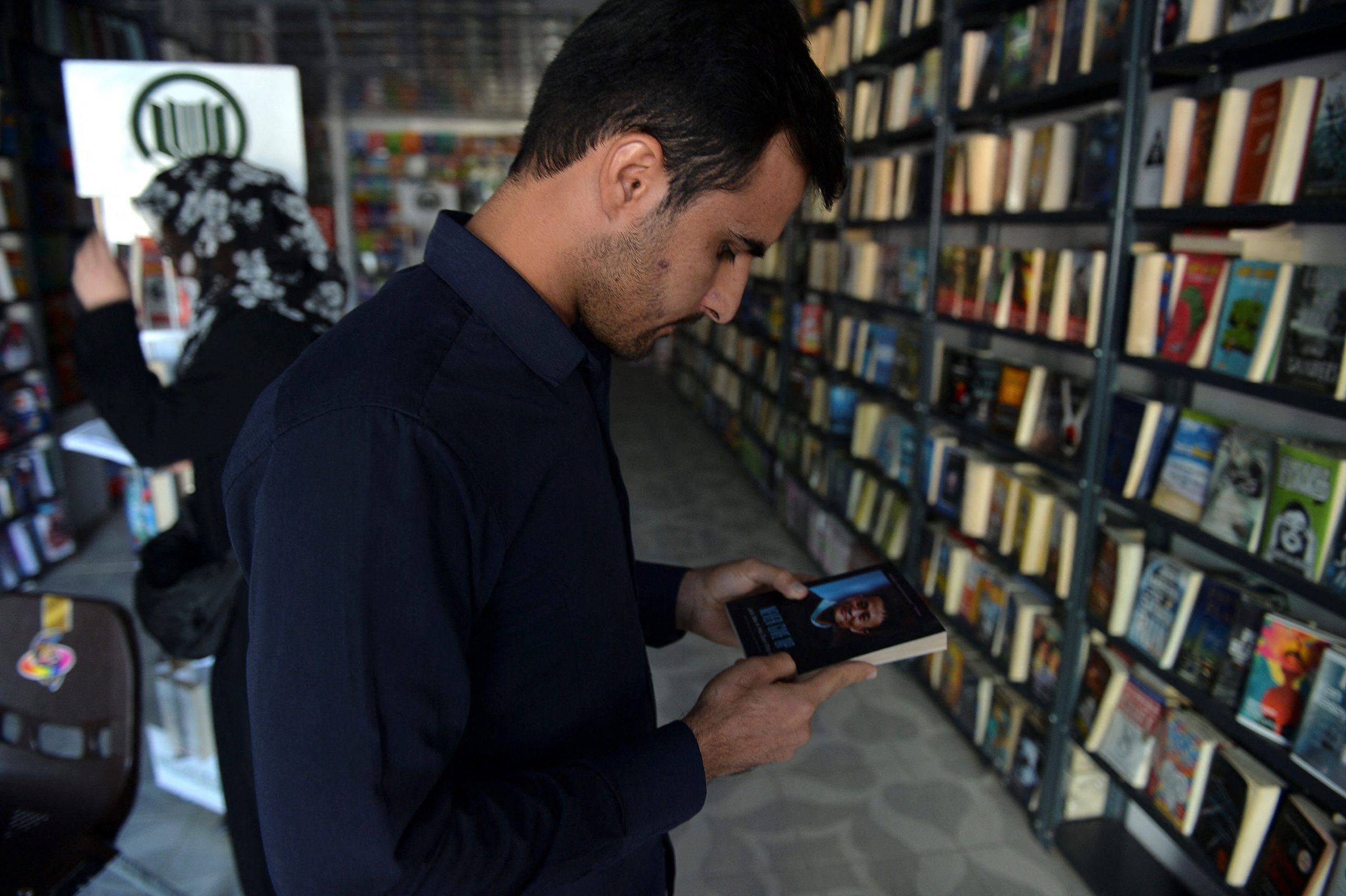 This picture taken on October 23, 2021 shows Mustafa Barak, law student and customer of Saadat Books, a store specialized in English-language texts, looking at a book in Kabul. Image: AFP

Others are open, but readers are left in the dark as lights are turned off to save electricity.

Abdul Amin Hossaini, a middle-aged bookseller in a knit pullover and heavy square spectacles, tells AFP that business was good before the fall of the city.

“We had at least 50 customers or books sold a day, now it’s almost nothing,” he says.

“I was beginning my dream to start a publishing company for children’s books,” he adds, describing how he was writing books about the lives of his two daughters.

Under the previous Taliban regime between 1996 and 2001, sellers of books they regarded as “profane” were forced to close, and some were ransacked.

In the two months since their return, the movement’s fighters have not directly troubled the booksellers of Kabul’s Pol-e-Sorkh district, but the fear remains.

One stallholder, who preferred to remain anonymous, told AFP that he had withdrawn the popular works of reformist Iranian theologian Abdolkarim Soroush from sale.

But in Saadat Books, which specialises in English-language texts, the selection is eclectic.

Alongside a dusty copy of Gustave Flaubert’s masterpiece “Madame Bovary” there are seedy tales from Los Angeles by the transgressive German-American poet and author Charles Bukowski.

“I am very surprised it’s still open,” admits customer Mustafa Barak, a 23-year-old law student, who comes every week to satisfy his passion for ideas.

“I just want to continue to learn new things, to improve my knowledge, to have an intellectual life,” he says.

“We are in this situation because we can’t read. Knowledge is what is left to us to try to fight this.”

On this visit he chose a book on personal development, “The Art of Thinking Clearly” by Swiss entrepreneur Rolf Dobelli.

Its proprietor since 1974, Shah Muhammad Rais, left for London on a business visa in September, though he intends to return. 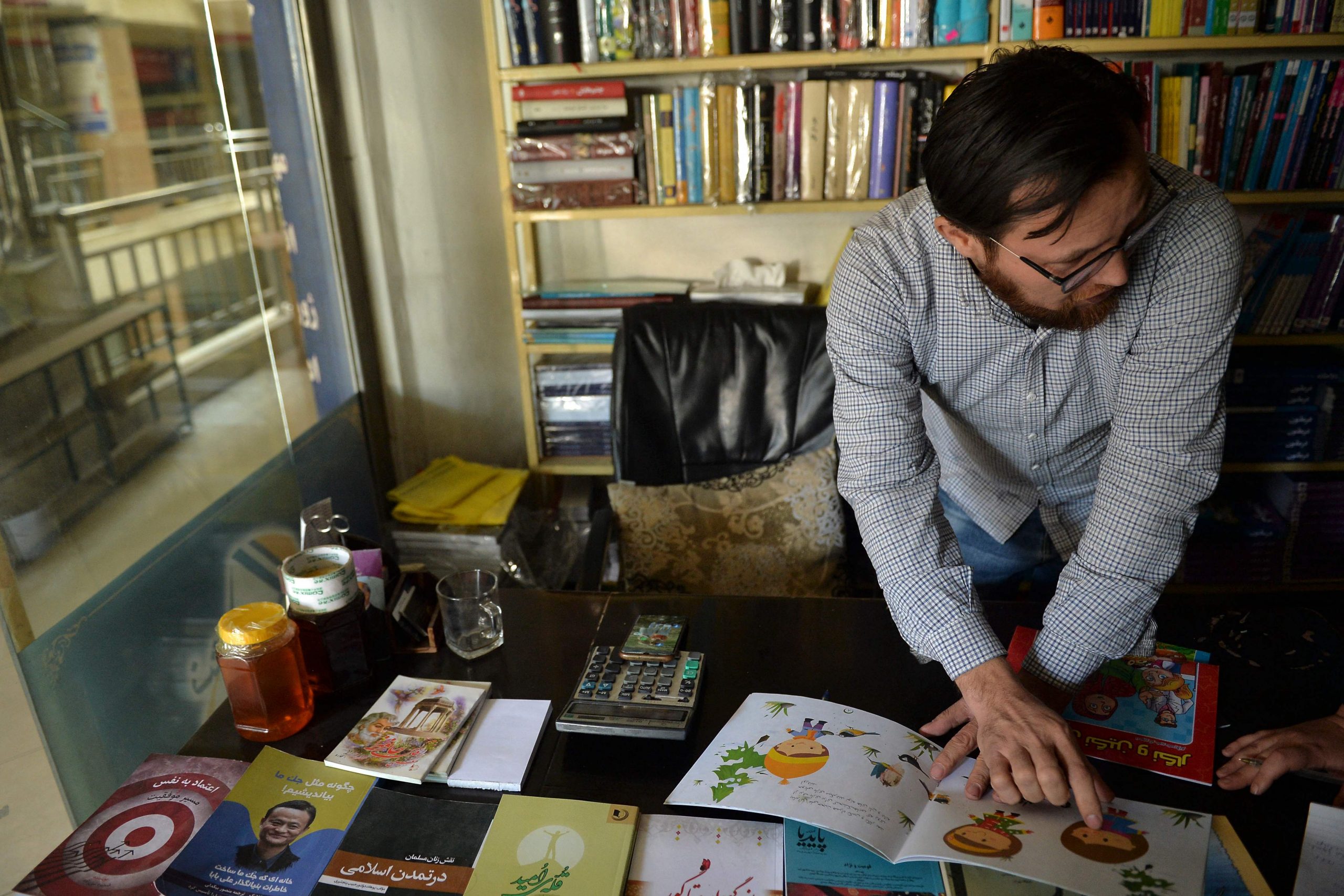 This picture taken on October 23, 2021 shows Abdul Amin Hossaini, a middle-aged bookseller, talking during an interview with AFP in Kabul. Image: AFP

But the premises in Kabul remain open, as they did under previous changes in regime.

Rais’ story inspired a bestseller by Norwegian writer Asne Seierstad, “The Bookseller of Kabul”, but his famous store has so far not attracted the attention of the new Taliban regime.

In the low-ceilinged corridors more than 17,000 titles in English, Dari, Farsi and Pashto recount the history of Afghanistan – many of them rare treasures, available for online sale.

“We stay open because we are keeping the heritage of the Afghan people, and a way for them to be able to study it,” says Suleiman Shah, the manager.

“Even the government doesn’t have the archives and books on the country that we have. We are the memory of this country.”

“They were looking for something I didn’t have, a religious book,” Shah says.

The missing book was the Ya Sin, the 36th Surah that warns of the fate awaiting non-believers and of the limitless power of God to protect the faithful and to promise their resurrection. It is sometimes known as the heart of the Koran.

“They looked quickly around the shop,” the manager says of the Taliban’s visit. “They stopped at the postcard stand, they wanted to make sure I had nothing romantic.”