It all started after reading mixed reviews of Ala Rahi. Located at Shehbaz Commercial, the restaurant seems unusually busy whenever one passes by it. The outdoor, as well as indoor tables, are always occupied. This is enough to entice someone to try the restaurant as of course, rational reasoning suggests that they ought to have good food which attracts such a large crowd day after day. On the other hand, what appealed to me the most to go to the restaurant and experience the food is their hype of serving Turkish cuisine.

The first time I tried to go, I checked on the bookings, came back waiting for my number, a whole back and forth after and my number came as they were about to close. So, struggling with all of this, I tried again and this time no matter what happens – a two hours long wait if needed – I was going to go in and taste their tantalizing Ala Sofra Kebab Platter that I had so intensely built up in my mind. They have a first come first serve rule so I made my family rush. We are going to get a table, by hook or by crook. After managing all the parking hassle and convincing the Manager, I eventually was given a table – and it felt like the biggest accomplishment. “Finally, we are in” I told myself. 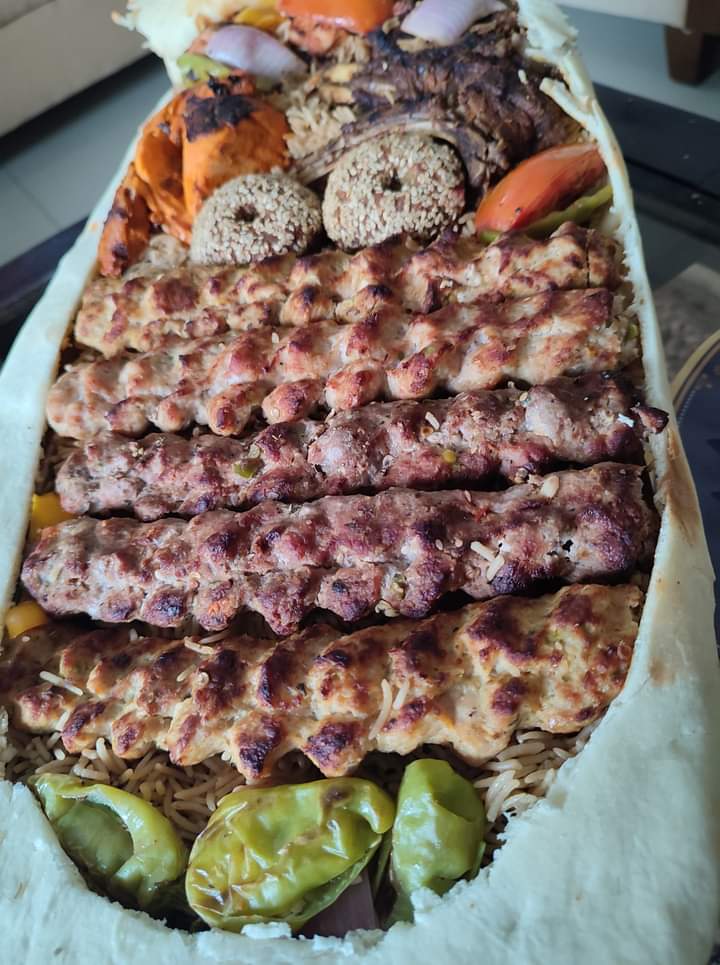 The Ala Sofra dish at Ala Rahi

My family and I were directed to the basement. It was sectioned into tables for families and for smaller groups of two or four. After being seated at a cute four-person corner table with my family, I let out a sigh and began to soak in the ambience. Dim lights, music, and shiny Turkish hanging lamps set the tone. Right in front of me was a TV playing visuals of their most appetizing foods for people who are already starving (me being one of them) and need no more enticing. I had my eyes set on the Ala Sofra platter. It’s all scrumptious meat. I am a meat person. It’s a match made in heaven.  The videos of tender meat, sizzling platters and mouthwatering close-ups had my hunger at an all-time high. I composed myself and held it together for in a short while I’m going to get that succulent Kebab platter. I want my Ala Sofra platter and I want it now!

“Ala Sofra is not available Ma’am.” The server said in an apologetic tone. My heart dropped. The ceiling crashed. Stars collided. The world might as well end.

“What?” I asked in surprise. I announced that my sole reason for coming was their highly publicized and dare I say, intentionally luring platter. The audacity of it not being available was beyond me but I inquired for some reasoning that would console me.

The server gave me a lengthy explanation that they are supposed to serve the dish in a platter, which apparently isn’t a normal one but is made of Turkish bread. “Our owners have gone to Turkey, to get this special bread, after which we will launch Ala Sofra.” The server told me.

I was upset but even more so, I was thrown off by the ludicrousness of his statement. All the waiting, hassle and pictures of food had me defeated. I sighed and looked at the server in disappointment, ready to eat a bag of air at this point. “Bring me something else which is equally tempting.” I chose Aazri Kabab and the server recommended Atish Dajjaj and a dessert Knafeh.

Our food arrived in 20 minutes which was surprisingly fast for such a busy restaurant and we dove right in, the likes of which could be contrasted to that of a war zone. Hunger had driven us to an edge. It was every man for himself, but I will spare you the details. Instead, I’ll let you in on what I thought of the food we had ordered. The beef Yakhni was unlike home-made Yakhni. It was loaded with a mint-like taste which made it taste like a Kahwah with spices. The first dish that arrived was the Aazri Kebab which I would recommend to everyone whenever they go to Ala Rahi. It was perfectly complimented with a side of red tomato and green chutneys which doubled the juiciness, especially when contrasted with pickles and hummus. It was worth every penny. Then, on the recommendation of our server, our main dish, Aatish Dajjaj, arrived in a big open platter. Heat rising from the hot tender rice topped with a nice serving of meat, it looked intensely appetizing but it received mixed reviews from us. Some felt that it tasted like biryani, whereas I, ever the meat lover, was won over by the sheer succulent and tender quality of the spiced meat and not so much by the rice pairing.

We were so heavily engrossed in our food and suddenly I saw the servers taking the Ala Sofra platter to three different families, comprising of several more members than mine. I was shocked. I had memorized every inch of that luscious platter from my daydreaming at work so I immediately knew what I had seen and was extremely confused. I waved at the server and called him to my table, ready to inquire about what can only be surmised as an absolute betrayal. “You just told me a few minutes ago that you don’t have Ala Sofra and that once you have complete ingredients only then will your restaurant launch the dish. How is this dish being served to other customers?”

The server started fixing his mask in confusion. “Ma’am, you might have heard me wrong.” He was clearly avoiding my line of sight. “I never said that the platter is not available.”

“Are you denying what you had told me about the platter not being available yet?” The conversation took a different direction. It was not about the food anymore, instead, it was about the fact that the restaurant was being crafty to hide the discrimination they did on the basis of family size (presumably prioritizing bigger groups of people) and insinuated that I, the one who came to the restaurant for the sole reason of tasting that platter, was perhaps lying about my previous conversation with the server.

I politely insisted on speaking to a manager. After waiting for another 15 minutes, a man came and asked me to recount my grievances. And I did. The platter didn’t matter anymore. I was lied to and I wanted a reasonable explanation. I narrated my fixation for the dish in question, how I adamantly inquired about it, how I was initially influenced into believing it wasn’t available, and how the restaurant took a 180 degree turn when I confronted them with evidence of being lied to.

The manager had no rational explanation to provide and proceeded to sugarcoat the scenario with unrelated praises and apologies, even fast-tracking our dessert order which had not been served yet.

The dessert arrived and we ate it half-heartedly. The hot Knafeh with vanilla ice cream on top was served on a wooden plate. A freshly baked dessert that had gooey cheese and was garnished with dried fruits (almonds and pistachios). The sweet level was balanced and quite delectable. One Knafeh proved to be more than enough for the four of us. 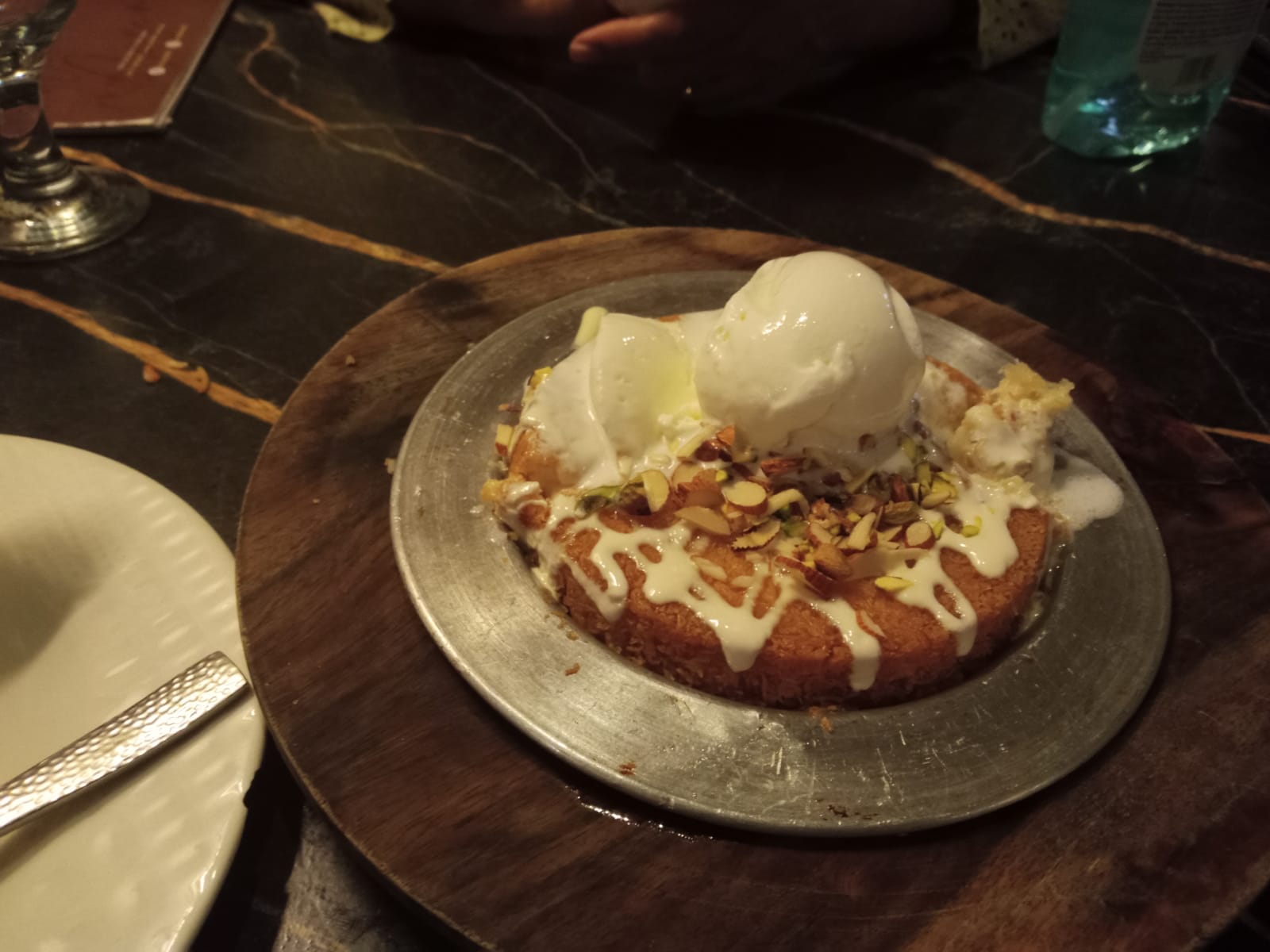 A freshly baked dessert that had gooey cheese and was garnished with dried fruits (almonds and pistachios). Photo: Maheen Aziz/Bol News

After we received the bill, I noticed that the dessert we ordered was not listed on the charges. After further inquiry, I was informed that the manager had taken it off our charges as compensation. While this may be an encouraging gesture of goodwill, I declined for it did not align with my beliefs. I did not want to be indebted to a place I was not made comfortable in. A free dessert doesn’t really fix the debacle that was my evening at Ala Rahi. The revised bill came and I paid it. I left with mixed feelings, shattered dreams, and a bad aftertaste.

Power couple becomes the ambassadors for a prestigious fragrance brand

Here’s some news for K Pop fans out there!

Govt not getting sales tax on petroleum products, says spokesperson

ISLAMABAD: Ministry of Finance Spokesperson Muzzammil Aslam on Saturday said that the...

ISTANBUL: Instead of Black Friday discounts, consumers in Turkey were faced with steep...

No bail for suspects in child pornography cases: SC

ISLAMABAD: The Supreme Court on Saturday dismissed an application for anticipatory bail...