LAHORE: The anti-smog squad van careens through choking traffic in Lahore, on its way to track down factories belching out smoke — a seemingly futile task in one of the world’s most polluted cities.

Inside the white vehicle sits an armed escort protecting the six members of the team, who clutch a list of locations they plan to inspect that day.

They scan the grey, heavy sky for telltale plumes of toxic smoke that indicate a factory is breaking environmental laws. 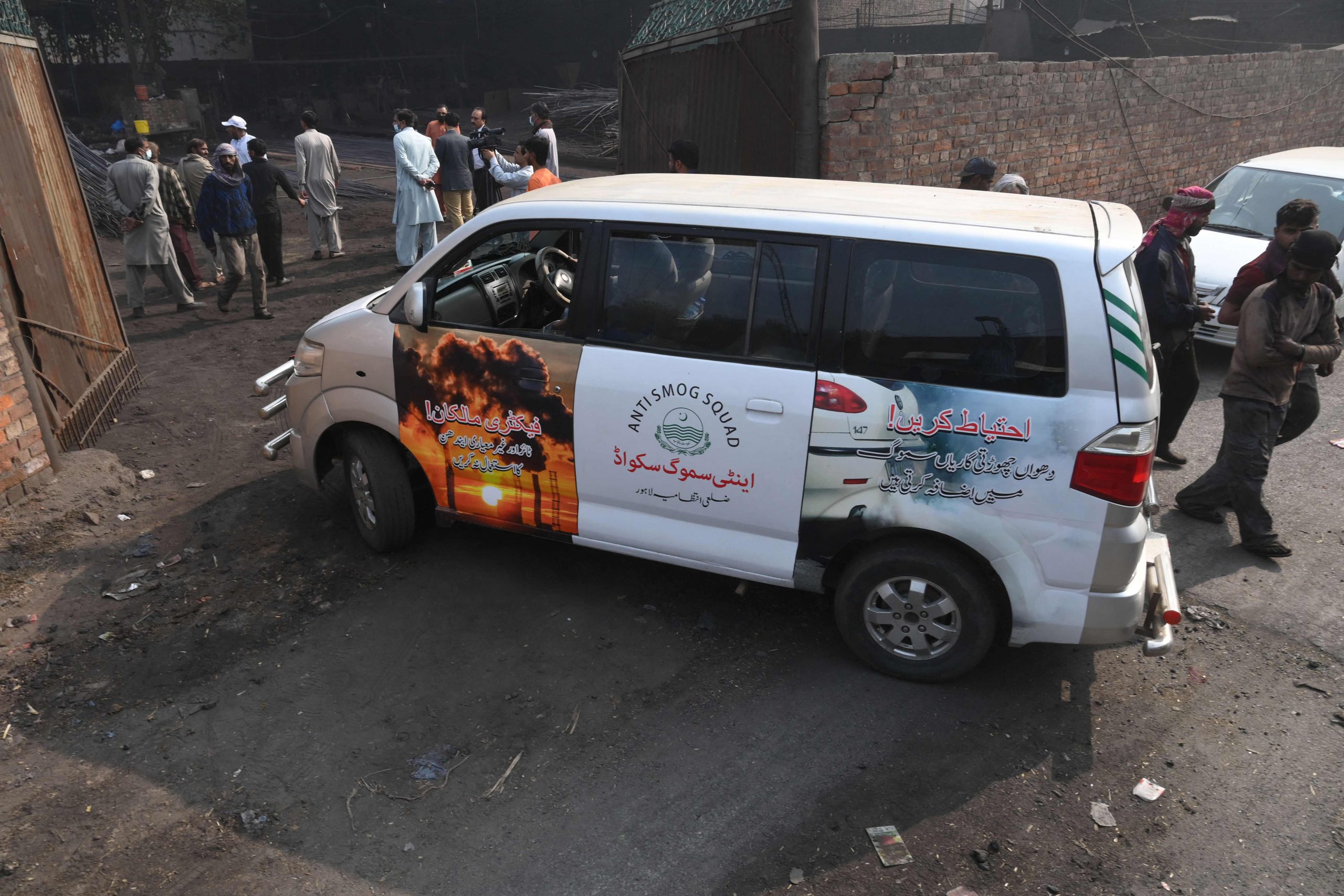 “All we need to do is follow the smoke to get to the source, we don’t even need the lists,” says Ali Ijaz, the environment department official in charge of the new operation, which is due to run for a month until mid-December.

The operation’s five squads are the latest effort by authorities in Lahore, near the border with India, to curb an annual pollution spike that has left more than 11 million residents gasping for air.

Ijaz says they intend to visit 300 industrial factories in the sprawling metropolis that have been identified as being responsible for the worst emissions.

Air quality in India and Pakistan has deteriorated in recent years, with winter’s hazardous pollution driven by a mixture of low-grade diesel fumes and smoke from seasonal crop burn off, worsened by the colder temperatures.

Lahore is routinely ranked as one of the world’s most polluted urban centres, and frequently tops daily rankings.

The hazardous air quality can cause breathing issues that range from discomfort to respiratory tract and heart diseases.

But authorities have been slow to act, blaming the smog on arch-rival India or claiming the figures are exaggerated.

This year the pollution has settled in earlier than usual, blanketing the city in stagnant, dirty grey air for days. Last week, Punjab Chief Minister Usman Buzdar called it a “calamity.”

On a recent mission, one of the five teams heads to a neighbourhood where smoke billows from numerous factories and mills that operate among the city’s dense population.

The air is a thick grey, and even with masks on it is difficult to breathe. Piles of trash litter the streets where large gates mark the entrances to the factories.

As the team enter the first factory, they can tell the polluting furnaces have only just been extinguished — they are still red-hot, and newly forged steel rods are resting on the ground to cool.

The squad members ask about the fuel and machinery. 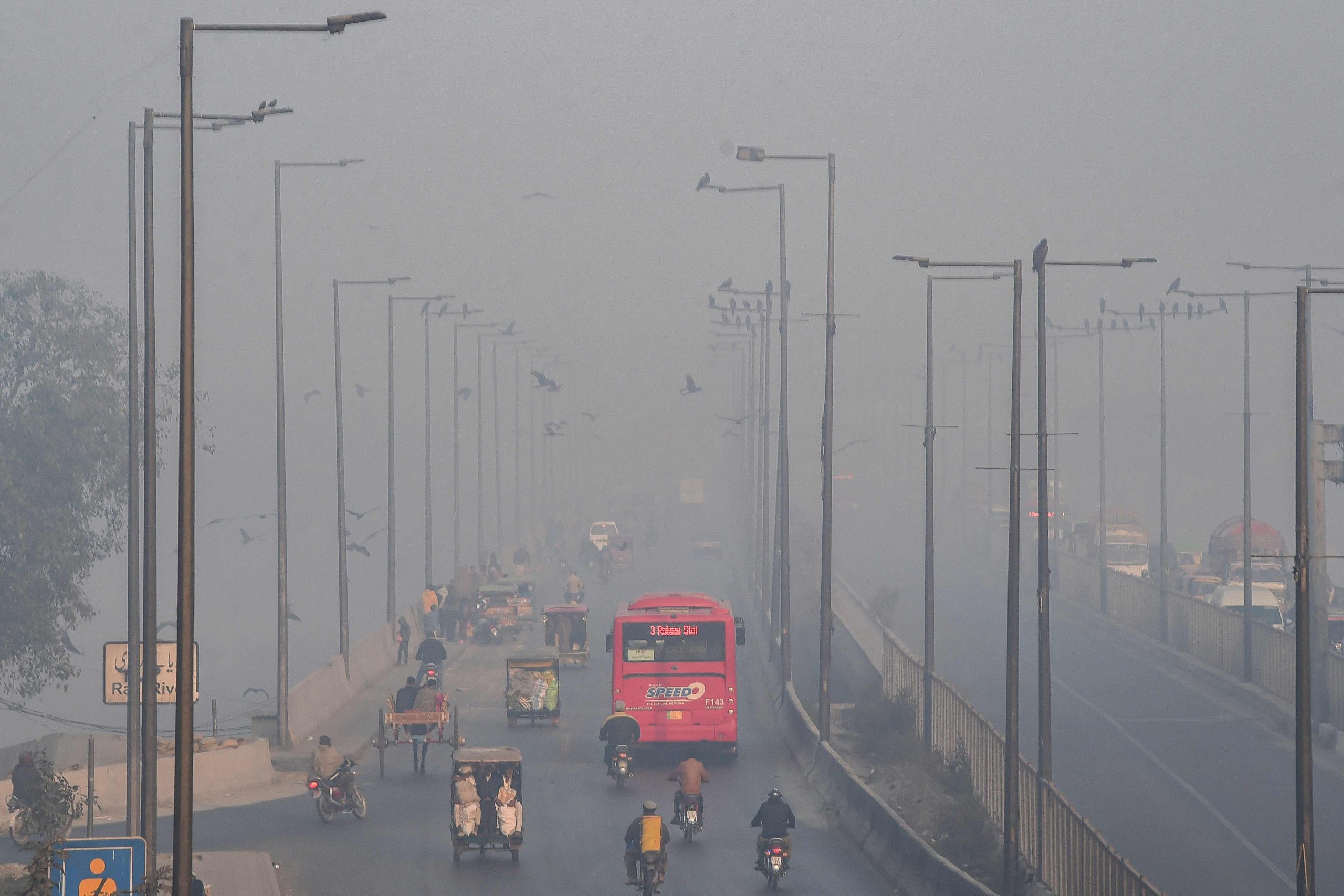 Commuters make their way along a road amid smoggy conditions in Lahore on November 24, 2021. Image: AFP

It emerges that this factory is missing a “scrubber”, a device that removes industrial pollutants from exhaust streams.

They swiftly shut it down and its workers are evacuated under the sharp eye of the armed escort.

This time, they stream out silently. But that has not always been the case, says environment official Ijaz, who describes “firing incidents” targeting his staff.

Although the squad is backed by legal powers, a lawyer threatens action and the two sides instead agree to simply seal off the machinery, and not the factory itself.

It is one of the numerous challenges faced by authorities.

“A lot of factory owners try to pressure the squad through political influence and connections,” one of the squad leaders tells AFP on condition of anonymity.

“It makes our work more difficult… We are forced to reach compromises.”

Authorities do not want to shut factories for more than a few days at a time, because the low-wage labourers are paid by the day.

Then there is the sheer scale of the task. 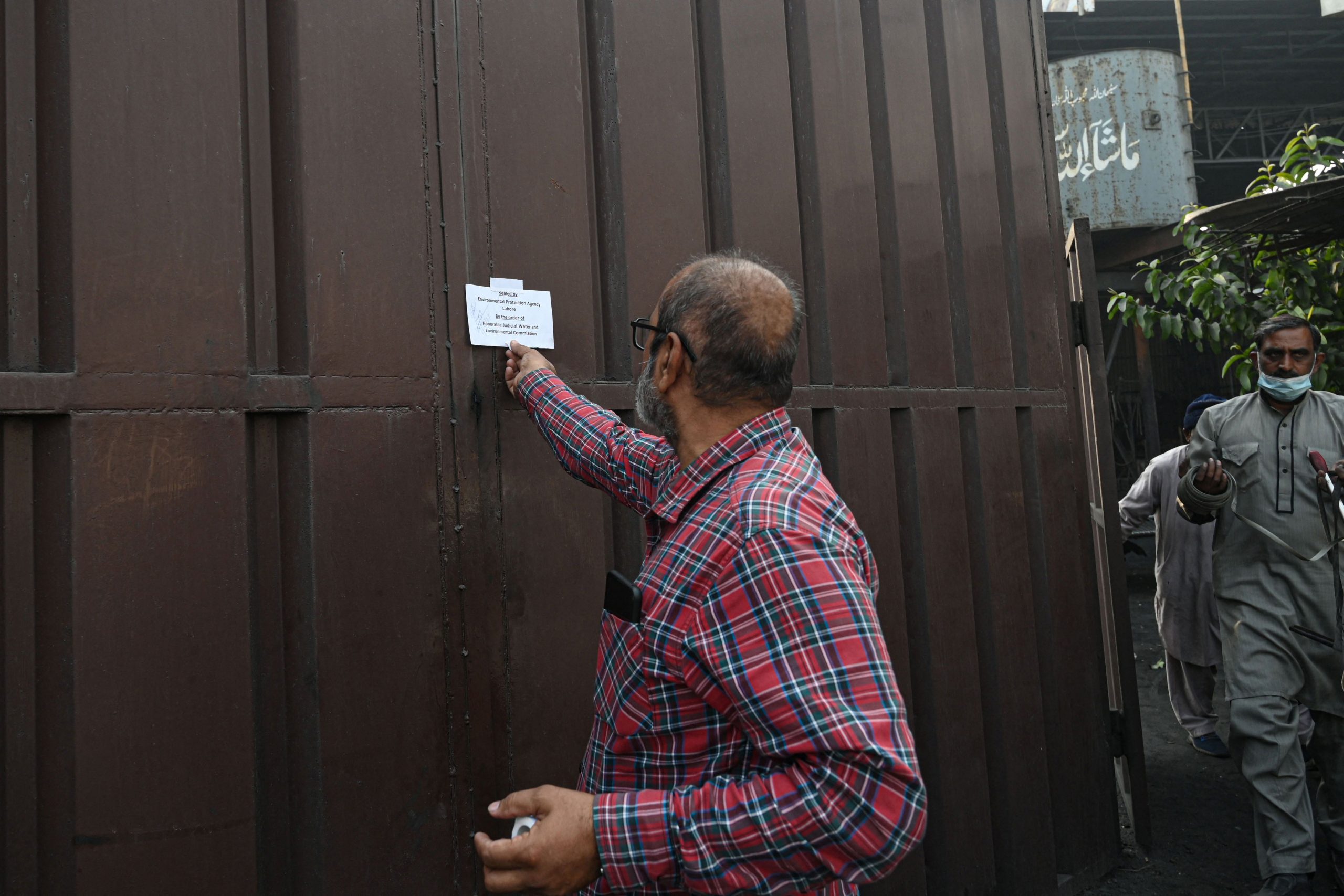 An official of the environment department Anti-Smog Squad sealed a steel factory for violating pollution norms in Lahore on November 19, 2021. Image: AFP

“There are thousands of industrial sites releasing emissions that cannot be tackled by six or twelve squads within just Lahore,” says environmental lawyer and activist Rafay Alam, dismissing the smog squad initiative as “cosmetic.”

Read more: ‘We thought he had Covid but it was smog’: Life in polluted Pakistan

Ijaz also does not hold out much hope.

Even if they could shut down all of the city’s factories and cut traffic, that would only “reduce the smog’s intensity, but not eliminate it,” he says.

“We will face this for the long-term.”

Shehbaz rejects mini-budget, promises to not let it passed from parliament

LAHORE: The opposition in the National Assembly announced on Thursday that they...

KARACHI: The Sindh Healthcare Commission (SHCC) on Thursday imposed a fine of...

Watch: horrific video of an elephant attacking a safari truck

A terrifying video of an elephant attacking a safari truck has made...

The internet has gone crazy over a video of a bunch of...

Watch: Hilarious video of a monkey going to the barber for a shave

The internet is abuzz with a video of a monkey receiving a...

Players in the Gaza Strip used crutches and prosthetic legs Thursday to...