San Francisco: Lombard is the world’s most crook Street

San Francisco: Lombard is the world’s most crook Street

Lombard Street in San Francisco is known as the world’s most crook street.

It is an east-West Street in San Francisco, famous for its steep, one-block section with eight hairpin turns.

But it turns out, Lombard is not even the crookedest in San Francisco, as that honor belongs to Vermont Street.

Despite that, Lombard is one of the most famous streets in the world. Every year, more than 2 million people come to visit, and take pictures on the steep street.

On a busy summer weekends, up 20,000 visitors come to the city for the famous street.

Tourists gather to watch as drivers make their way through the hairpin turns. 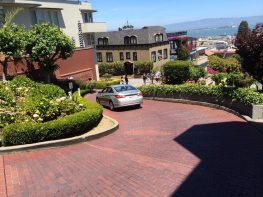 The street was completed in 1922, and was designed to slow cars down on the steep hill. Drivers drive through the street with speed of 5mph.

The portion that we all known from postcards is the section that has been classified as the most crook street in the world.

We use that term to refer to the windy switchbacks of road that grace the block between Hyde and Jones. Because of the curvy nature, and the one-way drive along the steep slope, this fun ride is also a visual treat.

You can count eight tight turns in just one block portion of the street.

Earlier it was said that, Thousands of tourists may soon have to pay as much as $10 to drive down the world-famous crooked street if a proposal to establish a toll and reservation system becomes law.

California lawmakers approved a bill granting San Francisco the power to establish a toll and reservation system for Lombard Street.

The San Francisco County Transportation Authority had recommended $5 per car weekdays and $10 weekends and holidays.

Residents said the scenic street has become more like an overcrowded amusement park than a neighborhood street. 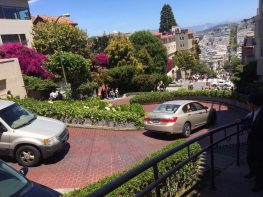 They had been calling for years for officials to address traffic jams, trash, and trespassing.

Tourism officials estimated that 6,000 people daily visit the 600-foot-long street in the summer, creating lines of cars stretching for blocks.

Ahlam Mohammad Ali, from Houston, Texas, USA, proved that no kind of...

For the past 34 years, Teri Rizvi has worked at the University...

Did you know the amazing details about Britney Spears' engagement ring?

American singer and songwriter Britney Spears got engaged to Sam Asghari on...