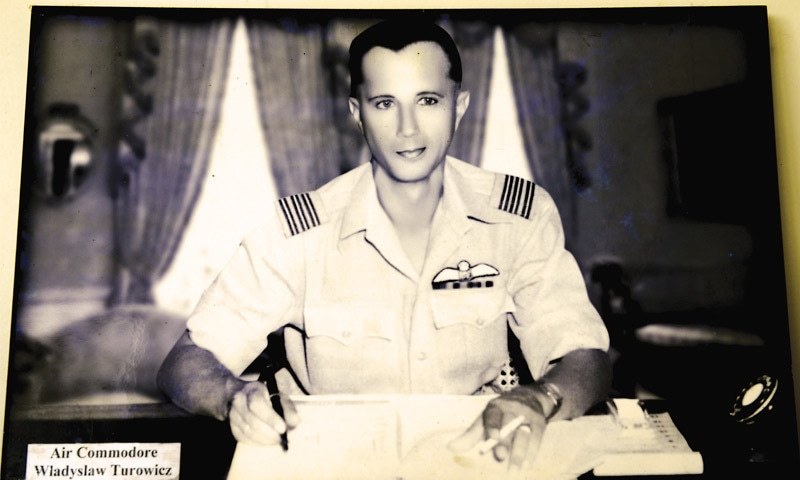 Of the many post World War II episodes, the one which merits attention is that of a group of Polish officers and men, who had sought refuge in Britain after their homeland was invaded by Germany. Most volunteered for the armed forces while a considerable number joined the Royal Air Force (RAF). They fought valiantly but when the war ended, nearly a hundred of them were left in limbo as they could neither go back to their homeland which was now under Soviet influence, nor were they welcome in Britain. Britain had welcomed the Polish pilots, engineers, and airmen with open arms when they had moved to Britain at the beginning of the Second World War because the Royal Air Force needed aircrew to continue the war. The Battle of Britain was won with the help of the Polish aircrew, but now they were no longer welcome in the UK.

While considering various options, fledgling Pakistan offered them three-year contracts with a high salary. Forty-five Polish officers and men joined Royal Pakistan Air Force (RPAF) as it was known then. “Royal” was dropped in 1956 when Pakistan became a Republic. The Polish who joined RPAF were led by Squadron Leader Władysław Józef Marian Turowicz, a pilot and engineer. From an early age, Turowicz was fascinated by aviation technology and moved to Warsaw where he attended the most prestigious engineering institute, the Warsaw University of Technology (WTU), majoring in aeronautical engineering; upon graduation, he received his PhD with honours in 1926.

He was commissioned in the Polish Air Force as an aeronautical engineer and fighter pilot, but later immigrated to the United Kingdom to join the RAF. During World War II he flew the British-built Handley Page Halifax Bomber and served in the RAF Aeronautics Division as Technical Inspector, overseeing aircraft electrical and system information for organizing, testing, and evaluating aircraft.

Joining the RPAF in 1948, Turowicz set up technical institutes in Karachi, taught and revitalized Pakistan Air Force Academy where he worked as a chief scientist. In 1952, Turowicz was promoted to the rank of Wing Commander and in 1959, to the rank of Group Captain while in 1960, he became an Air Commodore and an Assistant Chief of Air Staff, in charge of PAF’s Maintenance Branch. Turowicz is the pioneer of the College of Aeronautics in PAF. To commemorate his services, a trophy was named after him for the top student in aeronautical engineering. In all his endeavours, Turowciz was ably supported by his wife, Zofia. Turowicz’s wife took up the responsibilities of teaching gliding to the Shaheen Air Cadets in Karachi and Rawalpindi and taught Applied Mathematics and Particle Physics at Karachi University.

In 1966, the Government of Pakistan transferred him to SUPARCO, Pakistan’s national space agency as chief scientist. After Soviet Union’s launch of Sputnik, he, and Nobel laureate Dr. Abdus Salam successfully convinced President Ayub Khan of the importance of a space program for a developing country like Pakistan. The duo also persuaded the US Government to invest and train Pakistan’s scientists in the field of rocket technology.

Turowicz was appointed head of SUPARCO in 1967 where he initiated the space program, upgraded Sonmiani Satellite Launch Centre, installed the Flight-Test Control Command, Launch Pad Control System and System Engineering Division. Turowicz embarked upon a project for the fabrication and launch of a Pakistani satellite, which enabled Pakistan to master the field of rocket technology. Few people are aware that the renowned engineer designed ballistic missiles of short and medium range and participated in the development of Pakistan’s nuclear program.

The cruel hands of death snatched him prematurely in a car accident on 8 January 1980. He was taken to the military hospital where he was pronounced dead. He was buried in Karachi with full military honours. Both Polish authorities, including the Consul-General of Poland in Karachi Mr. Kazimierz Maurer, and Pakistani military and civilian personnel attended his funeral in Karachi.

The Government of Pakistan issued a condolence letter to his family, stating that Turowicz was not only an outstanding Air Force officer, but also a scientist, and had served in the country’s space program.

There is a conspiracy theory that Turowicz may have been assassinated by the detractors of Pakistan’s nuclear program; however, this was not proven. For his meritorious service, Air Commodore Władysław Turowicz was conferred with the awards: Sitara-e-Pakistan, Tamgha-e-Pakistan, Sitara-e-Khidmat, Sitara-e-Quaid-e-Azam, Sitara-e-Imtiaz, Abdus Salam Award in Aeronautical Engineering and ICTP Award in Space Physics. Pakistan Air Force placed a memorial plaque in the honour of Air Commodore Turowicz at the PAF Museum while SUPARCO erected the Władysław Turowicz Space Complex at Lahore. His widow, Zofia Turowicz, who died in 2012, was awarded the Pride of Performance and Sitara-i-Imtiaz.

A documentary film on the life and scientific work of Air Cdre Władysław Turowicz, directed by Anna T. Pietraszek, was completed in 2008.

The saga of scientific achievements by Turowicz lives on through his contributions to PAF and Pakistan’s upper space, missile technology and nuclear programme.